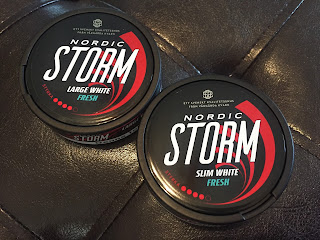 NOTE:  These products have been discontinued and are no longer for sale.

In case you missed my recent article, JTI Snus has been rebranded as Nordic Snus AB. When I talked to them, I was told this name change is done to better represent their snus production, it's tradition, and it's heritage. It is also to represent their business within the Nordic countries. The first products released after this name change are the new Nordic Storm products - an original flavor and two mint flavors. Because hey, we all know there aren't enough mint flavors in the world! With the popularity of mint, especially in Norway, it does make sense, though.  It's a smart move by a snus company - make a mint snus, make it strong, and it'll sell.  So, with the new Nordic Snus AB name, it only makes sense that they release a few mint products. 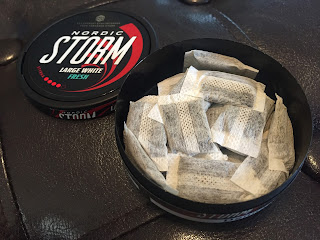 The product description for this one says, "Nordic Storm Large White Fresh has a flavor of spicy tobacco and refreshing menthol. This snus has a larger white pouch." This snus comes in a 21.6 gram can with 24 portions weighing 0.9 grams each. The nicotine content is 16mg/g (1.6%) which breaks down to 14.4mg/portion.

When you open the can, the aroma that comes through is predominantly menthol with a light touch of mint.  The portions are regular size, and quite comfortable in the lip.  As with most mint products, you'll encounter a nice, mild, cooling sensation in the lip.  It also spreads throughout the mouth and is quite refreshing!  The taste is predominantly menthol but there seems to be a light touch of mint in the background.  I also notice a very light taste of tobacco in the background after about 20 minutes of having a portion in.  The flavor is very long lasting; I've been able to enjoy these for up to an hour and a half.  This one has a pretty solid nicotine kick as well, it feels to be between a strong and an extra strong. 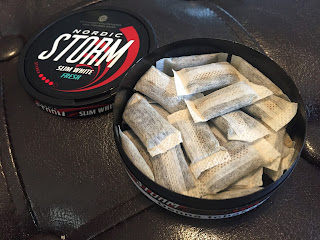 The product description for this one says, "Nordic Storm Slim White Fresh has a flavor of spicy tobacco and refreshing menthol. This snus has a slim sized white pouch." This snus comes in a 19.2 gram can with 24 portions weighing 0.8 grams each. The nicotine content is 16mg/g (1.6%) which breaks down to 12.8mg/portion.

This product is pretty much identical in all ways to the large white version, except for two things.  First, it's a slim white portion.  I'm a big slim portion fan, so I obviously like these more.  Second, the nicotine is a little lower per portion.  The large version clocked in at 14.4mg/portion, whereas the slim white version clocks in at 12.8mg/portion.  This one does feel strong, but it doesn't quite feel extra strong.  But the aroma, taste and longevity of this snus is the same as the large white version.

If you're a mint fan, I'd suggest giving these a try.  There aren't a lot of snus products where the menthol taste is front and center.  They're solid releases from the new Nordic Snus AB!
Posted by Chad Jones at 1:42 PM