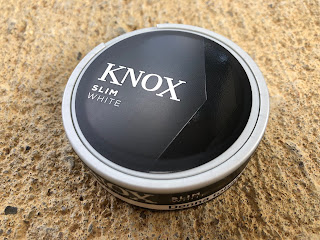 At the 2017 Snus Con in St. Louis, I met with people from Skruf for the very first time and I learned something interesting that I didn't know before. In the past I had reviewed Knox, and haven't given it much thought since then. I assumed it was another budget snus that people would buy to save a few bucks. However, I was surprised to find out that Knox is extremely popular in Sweden. It made me want to give Knox a second look, so I recently ordered the entire product line to go back and revisit. Today, however, we are talking about a brand new release from Skruf, Knox X Blue White Slim Portion. This is one of the first two slim products released in the Knox range. The flavor description says, "Think quality tobaccos with a dash of bergamot, this is a traditional snus flavor that could never go wrong! Knox Slim Original White has refreshing notes of citrus and also some light peppery hints to balance it all out." This snus is a 16.8 gram can with 24 portions weighing 0.7 grams each. It has a total nicotine content of 8mg/g (0.8%), which breaks down to 5.6mg/portion. 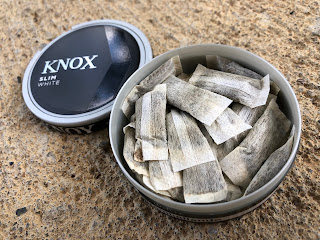 I originally reviewed Knox White Portion (Regular Size) back in 2009, so it's been quite a while since I've had a regular strength Knox snus! Upon opening the can, the aroma that greets you is a mild smell of bergamot. There are also light peppery notes in the smell. The white portion is soft to the touch and very comfortable in the lip. When it comes to the flavor, I didn't notice any difference between this and the regular sized white portion version. And yes, I had to actually go back and re-read my review to compare. When you've reviewed as many products as I have, it's hard to remember flavors of various products. This snus has a present taste of citrus, a mild tobacco character, a touch of pepper, and almost a light herbal/floral hint in the background. It's very faint, but I do notice it. It's a pretty tasty snus! The flavor lasts quite a while, also. I've found I can keep these in for up to an hour and a half! The nicotine feels to be regular strength in level and delivery, so I find myself satisfied with the nicotine delivery.  If you're a fan of Knox White but want it in a slim portion, definitely give this one a go.  If you're someone who loves traditional flavored snus and wants to save a few bucks, I'd suggest giving Knox a second look.
Posted by Chad Jones at 5:40 PM