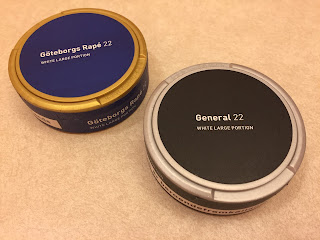 General 22 and Göteborg's Rapé 22 are two "temporary" products from Swedish Match that seem to be a more widely available test market. Swedish Match describes them by saying they are "a temporary variant in white format with a taste that most snusers recognize. Under the lid are 22 soft and strong portions which fill out a little extra. The purpose of the edition is to evaluate the product's new and specially developed features together with our snusers. More full portions - through a new way of treating the tobacco. More strength and taste - through a new way of refining tobacco into snus. More gentle and softer portion - through a new way to pack the portion."  My friend Patrick sent these to me, so I wanted to say a special thank you to him.  These weren't made available to the US, so it's unfortunate that US snus fans didn't get to send in their feedback. 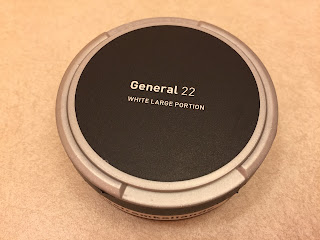 The flavor description for General 22 says, "The flavor is the same that has always characterized General - Light and spicy tobacco character with distinctive elements of bergamot and citrus. A big portion that is dry on the surface with moist content for low purity and a lasting taste release." This snus comes in a 17.6 gram can with 22 portions, for 0.8 gram portions. The nicotine content is 14mg/g (1.4%) which breaks down to 11.2mg/portion. 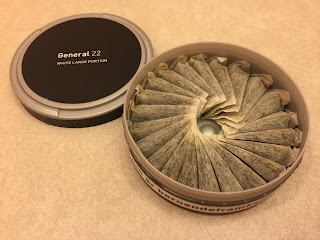 When you open the can, the aroma smells like regular General, but I notice more present citrus and pepper in the aroma. The real standout of this product is the portions. They are incredibly soft and feel very plump for only being 0.8 grams. The tobacco inside the pouch is also very soft, so it doesn't take as much fluffing to get them into the lip! The taste seems to be more present in this one than regular General White Portion. I notice a more robust and well rounded tobacco taste, as well as a stronger presence of bergamot and pepper. It also seems like the flavor comes on quicker. Being a white portion, the flavor is long lasting; I've found I can enjoy this snus for up to an hour, sometimes more! The nicotine packs a nice kick and feels to be right at the strong level. 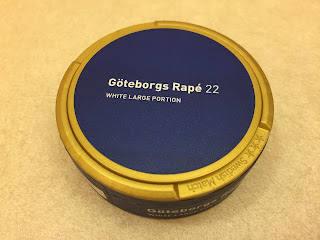 The flavor description for Göteborg's Rapé 22 says, "The flavor is the same that has always been called Göteborg’s Rapé, a light and spicy tobacco character with clear elements of lavender and juniper, as well as some wood and citrus. A big portion that is dry on the surface with moist content for low purity and a lasting taste release." This snus comes in a 17.6 gram can with 22 portions, for 0.8 gram portions. The nicotine content is 14mg/g (1.4%) which breaks down to 11.2mg/portion. 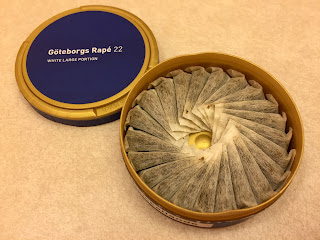 The aroma of this one is much like regular Göteborg's Rapé but it seems the juniper is more present in the aroma. The floral notes and herbal notes are mild and in the background. Like General 22, the portions are fantastic. They are incredibly soft and feel great in the lip.  The tobacco in the pouch is also very soft as well so I didn't have to fluff these as much!  Even though they are only 0.8 grams, they still feel quite plump! The taste of this one is the familiar Göteborg's Rapé taste: a present flavor of juniper, a mild hint of citrus, and light herbal/floral notes in the background. With this one, I notice more tobacco peeking out of the flavor, which I didn't pick up as much of in the regular GR. Also, the juniper taste seems to be more bold with this one than regular GR. The taste lasts a good amount of time; I've been able to enjoy this one for an hour to an hour and a half. The nicotine feels to be at about the strong level, as well.

The Verdict:  I enjoyed this one, but still prefer the taste of the regular GR.  However, I do prefer the portions on this snus.  They are fantastic and incredibly soft.

As far as these two products go, I hope Swedish Match carries the portion material and tobacco consistency forward.  The portions are very soft, and the tobacco inside the pouch is quite soft as well!
Posted by Chad Jones at 8:56 AM