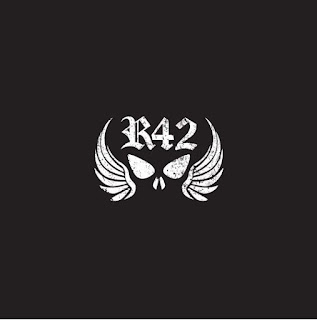 I wrote a preview of a Swedish Match product sold at the Sweden-Finland border stores called Revel (by Rocket), back in August of 2016. I've never had much luck finding these products, in fact, there is one called Rocket that I've been hunting for for several years now. Earlier this year, Swedish Match changed the name of Revel to R42.  Honestly, I haven't heard much about these products.  When they were called Revel I would hear whispers of them, much like the Rocket snus.  They may not have distribution outside of the border stores, which could explain why not many people talk about them.  I'll see photos of them pop up on Instagram from time to time, but that's about the extent of their word of mouth. I want to give a shout out to our friend @smokeitnowmaan on Instagram who acquired these products for us to review.  Being in the US, it's hard for me to get ahold of products from time to time, but I'm thankful for our reader base and the friends we have made who want to see us review these products and will send them to us from time to time! 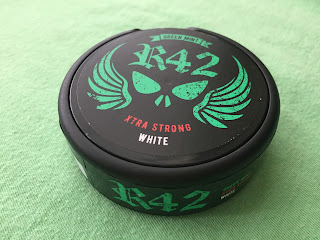 Going into my reviews, I like to have information about a flavor description and nicotine content to offer in my reviews, but with these, I don't have much info.  I don't have a flavor description beyond what the can says, "Green Mint". The can is an 11.2 gram can with 16 portions, which weigh 0.7 grams each. The nicotine content is listed as 4/4. What that means, I’m not sure of. I do know other Swedish Match white portion products listed as 4/4 usually have 18mg/g of nicotine. If that’s the case, that would put these at the 12.6mg/portion level. 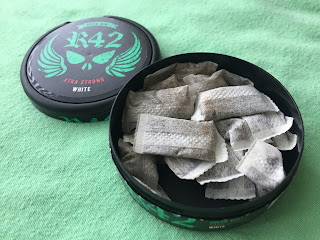 When you open the can you're greeted with a natural mint aroma with a touch of sweetness. One thing that is interesting about this one is that in the aroma and the taste I pick up something interesting...melon. Someone on /r/snus on Reddit mentioned it too, so I'm glad to know I'm not the only one who notices it!  The portions are relatively soft, but light due to the 0.7 gram weight per portion. With these, I can actually fold them over on themselves and put them into the lip as a slim portion.  I also experience a mild cooling sensation in the lip. The taste is a gentle, mildly sweet taste of natural mint.  Much like the aroma, I notice a taste that reminds me of melon, as well.  It's interesting.  The flavors actually seem to work well together, and I'm not usually a fan of mixing mint and other flavors like we see with the Skruf Fresh line.  The portions are dryer than the average white portion, so I find the taste to last a good amount of time, usually an hour to an hour and a half.  The nicotine is moderately strong, it feels to be between the strong and extra strong level.  I found this to be an interesting tasting snus, that's for sure. 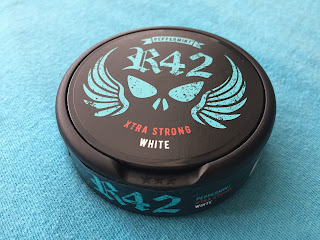 Much like with Green Mint, I don't have much information on this one beyond what the can says, "Peppermint". The can is an 11.2 gram can with 16 portions, which weigh 0.7 grams each. The nicotine content is listed as 4/4. What that means, I’m not sure of. I do know other Swedish Match white portion products listed as 4/4 usually have 18mg/g of nicotine. If that’s the case, that would put these at the 12.6mg/portion level.  These products both have the same weight and appear to have the same nicotine content. 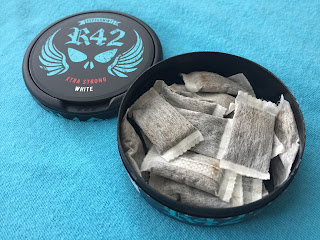 When you open the can, the aroma that comes through is a present smell of peppermint. It isn't as sharp as most peppermint snus I've reviewed before, it seems to be a little more gentle and mellow. The portions are light at 0.7 grams each, but like with Green Mint I can fold the portions over on themselves to make slim portions. There is also a nice cooling sensation in the lip! The taste is a mellow, gentle peppermint taste. It's not as sharp as I've had in the past with other peppermint snus; it comes across in a much more mild way! The portions are dryer than most white portions, so the flavor lasts quite a while. I can keep these portions in my lip for an hour to an hour and a half! Like with Green Mint, I would say the nicotine strength feels to be between strong and extra strong. It's a pretty decent kick!

Both of these products were pretty good, and I'm glad I got to try them.  If you encounter them in a border store, they're worth trying out!
Posted by Chad Jones at 10:54 AM