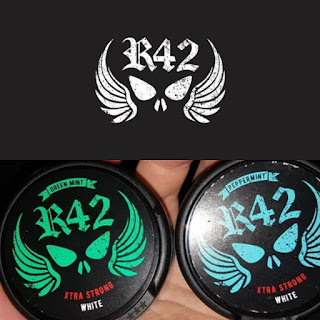 I originally wrote about Revel Snus in August of 2016. To date, Revel Snus and Rocket Snus have been the only Swedish Snus products I’ve been unable to find for review. It now appears as though Revel has changed names to R42. Our friend @smokeitnowmaan supplied us with photos of the new cans, you can see them at the bottom of the photo on the left. The Revel name was registered by Swedish Match in July of 2016. It is now classified as dead, and apparently Swedish Match let it go on February 24th, 2017. The new name, R42, was registered on January 17th, 2017, in preparation for the change of name.

Not only has the product line been rebranded, a new product has launched.  In addition to R42 Peppermint Xtra Strong White, Swedish Match has also launched R42 Green Mint Xtra Strong White.  These products are apparently available now!  If you've had them, let us know what you think!
Posted by Chad Jones at 1:02 PM