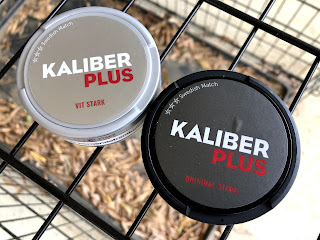 Not too long ago, fans of Mustang Snus were saddened to find out that Swedish Match was discontinuing those products. They did, however, announce those products would live on in Kaliber+. Swedish Match said, "To make room for new and updated versions of other snus brands, Mustang original portion and Mustang white portion will be discontinued this spring. In its place, we launch the new product Kaliber+, which has a similar flavor. Kaliber+ is available as both original portion and white portion from February and onwards."  Going into these products, I expected them to be an exact clone of Mustang.  It's true that they are similar, but I did notice some differences in these products.  The can designs are similar to other products in the Kaliber line, having a very simple and clean look. 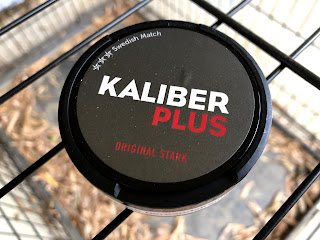 The flavor description of Kaliber+ Original Portion says, "A dark and spicy tobacco taste with notes of lingonberries and bergamot, along with hints of cocoa and bitter orange."
The can is an 18g can with 20 portions, or 0.9 gram portions. The nicotine content is 1.4%, or 14mg/g, which equals out to about 12.6mg per portion of nicotine. 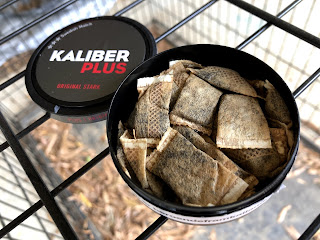 When you open the can, you'll notice the portions are quite moist.  The aroma that greets you is a robust tobacco smell with hints of citrus, pepper and a light lingonberry presence.  The flavor starts off with lingonberry and well rounded tobacco.  The longer you have it in the more you'll notice the taste of citrus develop, which is complimented by a subtle spiciness from the pepper.  The lingonberry flavor is interesting.  It weaves in and out of the flavor profile.  I notice it a lot at front, and then it comes in and out of the taste while I keep the portion in.  Eventually the lingonberry flavor fades and you're left with just the taste of tobacco, citrus and pepper.  I would say the flavor is close to Mustang Original Portion with one difference:  this one has a lingonberry taste whereas Mustang had more of a dried fruit blend taste.  The nicotine content is 14mg/g and 12.6mg/portion.  I do feel a little extra nicotine from this one but I would say it feels closer to a strong than an extra strong.  Don't let the extra strong name scare you, it's not going to be too strong if you're not used to the extra strong level. The flavor lasts about as long as most original portions. I can enjoy this one for up to the 45 minute to an hour mark. 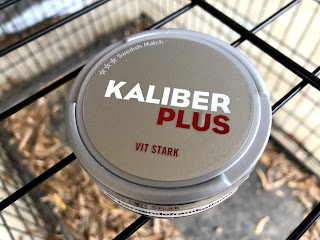 The flavor description of Kaliber+ White Portion says, "A mellow and spicy tobacco taste with distinct notes of bergamot and tea, along with hints of rose and cardamom."  The can is an 18g can with 20 portions, or 0.9 gram portions. The nicotine content is 1.4%, or 14mg/g, which equals out to about 12.6mg per portion of nicotine. 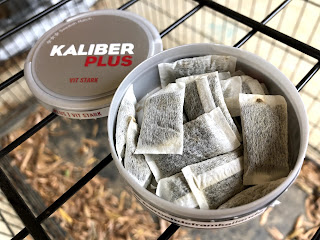 When you open the can you'll notice the portions look like your regular white portion.  The portion material itself is soft to the touch and feels comfortable in the lip.  The aroma that comes through is mild tobacco, a light touch of citrus, and a little pepper.  As far as the flavor goes, it starts with a mild tobacco character.  The longer you have the portion in the more you'll notice the citrus flavor develop and a touch of pepper in the background.  There is a light tea-like presence to this snus, as well.  I don't detect any rose or cardamom in the flavor, however.  I was really hoping to encounter that, but I didn't notice it. If I had to compare it to something, I would say it's close to General White Portion, but the citrus and pepper flavors are more mild.  The flavor lasts quite a while, I've had these in for up to an hour and a half.  The nicotine strength isn't too strong.  Like the original portion, it's 14mg/g or 12.6mg/portion.  It feels closer to a strong than an extra strong and isn't going to knock you out by any means!

As far as these two products go, I'd say the original portion was the better of the two and one that I might re-order again.  The white portion is nothing spectacular.  But, if you're a fan of the traditional Swedish Snus flavor profile and want to save a few bucks it might be one to try out.