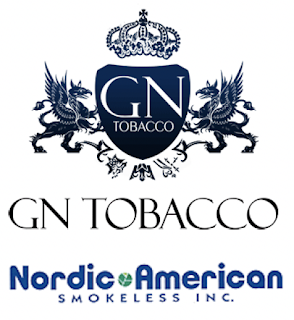 GN Tobacco is expanding more and more. Recently, they acquired SPT which brought the Byron, Taboca and WOW! Brands into the GN Tobacco portfolio. Now, GN Tobacco has become part owner of Nordic American. CN Smokeless, which is owned by Nordic American and Cheyenne Tobacco Factory, produces the smokeless tobacco products Klondike and Nordic Ice. What’s interesting is that in 2008, Taboca USA changed their name to Nordic American Smokeless. The company was affiliated with the Norwegian snus company, Taboca A/S, which made Taboca Snus. Taboca Snus is now owned by GNT. So it’s almost come full circle.

This is a very interesting move for GN Tobacco and helps them push more into the American market. Much like Swedish Match owning Pinkerton Tobacco, this move expands GN Tobacco’s portfolio as well as giving them, potentially, more access to the American Market.
Posted by Chad Jones at 12:34 PM