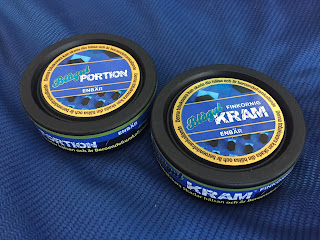 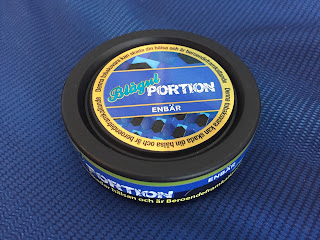 Blågul Enbär (Portion) has a description that says: "With clear trains of juniper and some smoke.” This snus can has a weight of 18 grams and contains 22 portions (0.8 gram portions).  This snus is also quite cheap, it's around 1,20 Euro which is about 1.25 USD.  So if you're a budget conscious snuser, this may be a way to save a few bucks! 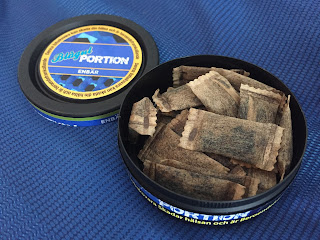 When you open the can you'll notice the portions are quite moist. They feel a little light in weight, just a little less than a gram going by feel. The aroma that comes across is predominantly juniper with a light perfumey quality to it, a little floral sweetness and a heavy black pepper presence. The taste is a very present juniper taste along with a very present taste of black pepper. There’s also a light sweetness in the background and light floral notes. In case you were thinking this may be a clone of Gōteborg’s Rapé, it definitely isn’t that. It’s very unique in terms of taste. I'm not sure of the nicotine content, but if I had to guess I'd say it feels like it's between 8mg/g and 12mg/g. 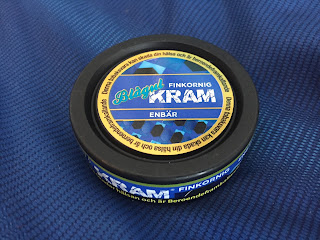 Blågul Enbär (Kram) has a description that says: "With clear trains of juniper and some smoke.” This snus can has a weight of 37 grams. This snus is also quite cheap, it's around 1,20 Euro which is about 1.25 USD. So if you're a budget conscious snuser, this may be a way to save a few bucks!  Even though this is a los product, it is called "kram".  That was a new term for me! 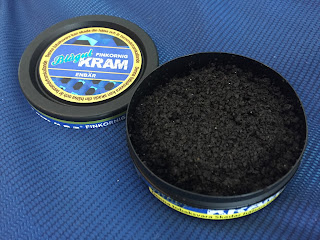 When it comes to the los version, there is a pretty solid amount of moisture to it. The grind isn't the easiest to handbake so I used a tool with this one, but once I packed a prilla it stayed together really well. I notice the los to be more complex than the portion. The aroma is a presence of juniper a light perfumey quality, light floral notes, black pepper (thought it is more dialed back than the portion version), an earthy tobacco smell and a faint hint of chocolate. The taste is also different from the portion veresion. I notice the juniper taste to be more dialed back and to be equally present with the tobacco flavor. There are mild floral notes, as well, and a light taste of black pepper. The peppery flavor isn’t nearly as present as I noticed int he portion version. Much like the portion version, this is a very unique tasting snus and not a clone of Göteborg's Rapé. Much like with the portion version, if I had to guess the nicotine strength I'd put it somewhere between 8mg/g and 12mg/g.

If you're looking to save a few bucks and you're able to order from SnusHof.com this one isn't too bad.  For a budget snus, it has an interesting flavor.  It's hard to recommend or compare, so this is one I'd suggest giving a try to, just to see if you like it.  It's a unique flavor, that's for sure.  And though I initially expected it to be a clone of Göteborg's Rapé, I was surprised to see it was anything but!
Posted by Chad Jones at 1:53 PM