Swedish Match announced yesterday that Mustang Snus is being discontinued. In their press release, they said:

"TIME TO SAY GOODBYE TO MUSTANG

Soon, we cease the production of Mustang. But the flavor remains.

To make room for new and updated versions of other snus brands, Mustang will be discontinued this spring. In its place, we launch the new product Kaliber+, which has a similar flavor. Kaliber+ is available as both original portion and white portion from February and onwards." 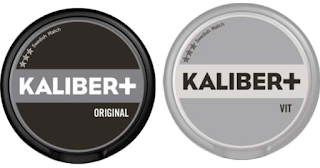 I did a preview recently of Kaliber+, so if you missed that, these are the flavor descriptions of those new products.

Kaliber+ Original Portion has a "dark, spicy tobacco character with hints of berries and bergamot, as well as hints of cocoa and bitter orange."

Kaliber+ White Portion has a "light and spicy tobacco character with clear hints of bergamot and tea as well as slight hints of rose and cardamom."

Kaliber was originally said to launch this year, but it looks like it will actually be launching in 2017 when Mustang is discontinued.
Posted by Chad Jones at 8:10 AM