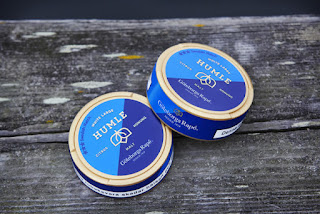 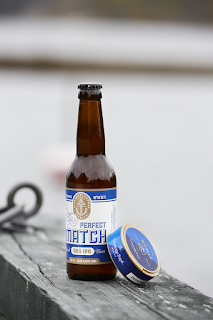 This new snus is a collaboration with Fjäderholmarnas Bryggeri, or Fjäderholmarnas Brewery. Michaela Bergström, Göteborgs Rapé brand manager at Swedish Match described this new snus like this: "It was inspiration from the beer world and the vision of Fjäderholmarnas Bryggeri to offer taste sensations that will be etched in the sense of taste. [It] has led us in the development of Göteborgs Rapé Humle [and] dared us to completely [try] new methods and flavor combinations than the ones we use in our traditional snus production. It has given Göteborgs Rapé Humle a very special flavor profile and best enjoyed with an India Pale Ale."  The backbone of the taste is said to be authentic hop oil. It adds a clear, robust and bitter taste. The bitter taste is balanced with notes of citrus, malt, and a touch of honey. 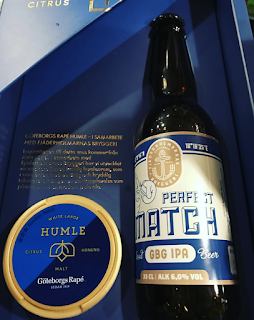 This photo was posted by Kingsize Magazine on Instagram, so it appears there may be a pairing box like there was with General Mackmyra. Their caption said: "We will celebrate Thanxgivin! Let's go to the Hard Rock and check the NFL with @nflpodden, but before it starts, we will test the new Göteborgs Rapé Humle (citrus / honey) snuff together with Fjärderholmarnas Bryggeri "Perfect Match" IPA. This is magic! Thanxgivin Happy!"

One of the downsides of living in America is that this box will probably not be available to us.  And I'm not sure if this beer is sold here in America, so unfortunately we won't be able to pair this snus with one of their beers when we review it.  But, I'm sure we can find another IPA that we can test this snus with! 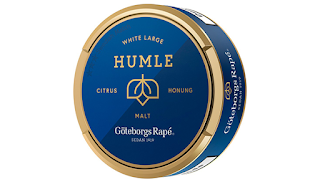 Göteborgs Rapé Humle is Swedish Match's first snus where the flavor is inspired by beer culture. It is a flavorful and spicy snus, with distinct bitterness from the hops.

Much like snus, beer is a product with few ingredients which, if handled correctly, can provide a great variety in taste and experience. Sweden has in recent years made a name for itself in the international craft beer community, mainly for its microbreweries – where high quality, flavorful beer is brewed in small batches and with attention to craftsmanship. This has made a great impression on us at Swedish Match. When we developed Göteborgs Rapé Humle, we chose to contact the people behind microbrewery Fjäderholmarna´s Brewery – who became our inspirators and our sounding board. Taste-wise, Göteborgs Rapé Humle is the first Swedish Match snus ever where we used bitterness in the flavor palette. We balance it with notes of citrus, malt and a bit of honey. The result is a flavorful snus, that doesn’t remind of any other of Swedish Match’s snus varieties."

This snus is, of course, a limited edition. 30,000 cans were produced and to be released in Swedish Match stores Stockholm, Gothenburg, Åre and Stromstad on 25 November 2016. From 5 December 2016 you'll be able to find it at 7-Eleven, Pressbyrån and SnusBolaget.se.  At this time, I'm not sure if we'll see this online for those of us here in America, but I'm hopeful that we will. 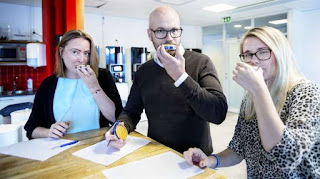 Expressen, a Swedish daily newspaper, tried this new snus and wrote some of their initial impressions. Li Björnberg remarked, "It smells really beer, awesome! Is well below the lip, however, had wanted to test it in loose form to obtain the correct consistency. Very little taste, had expected more. I am fond of snus when tastes snus." Per Zettermak remarked, "Reminiscent of old stale beer. Facing better lower lip than the usual white-pouch. [Taste] is almost non-existent. Probably not the intention, but it can be nice if you just want to nicotine." Hannah Boman remarked "Smell [is] piercing, acrid. Perfume and citrus. Good sized pouch. Not much taste. But can still feel a little hint of beer. Less perfumed than regular Rapé, which is a plus."

I will be interested to review this myself and see my thoughts on it.

Photo Credits: KingMagazine.se, Expressen.se.
Posted by Chad Jones at 5:06 AM