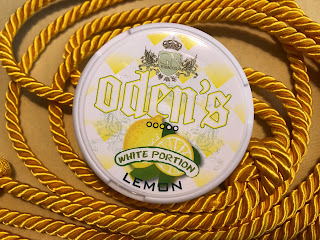 I can't believe it's been 4 years since I've had this one.  Honestly, the last time I had it was the last time I reviewed it, which was back in 2016.  However, due to a new law in Sweden, snus cans must now contain 20 portions of snus per can, so I'm re-reviewing a lot of products that formerly didn't have that much snus in the can, it used to only have 15.  The flavor description for this snus says, "A normal strength portion with a taste of lemon",  Each can weighs 20 grams and has 20 portions, for plump 1g portions!  The nicotine content is 9mg/g (0.9%), or 9mg/portion! 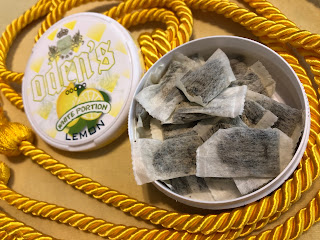 When you open the can, the aroma is unmistakably lemon. It's not too sweet, and not too tart, either. The portions are pretty soft, but I do suggest fluffing them to break up the tobacco inside the pouch. Once you do that, they feel better under the lip. The flavor is a present taste of lemon, which comes through in a natural, gentle way. It's not sweet, it's not tart, it's not artificial. It's just straight up lemon. The nicotine strength on this one feels to be right at the regular strength level, and the flavor lasts about an hour on average!  As far as this one goes, it's a pretty enjoyable snus.  And I will say this, it pairs great with a good beer!
Posted by Chad Jones at 5:30 PM