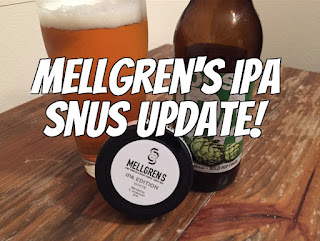 A lot of people have been asking lately about Mellgren's IPA Snus. As a lover of IPA beers, I fell for this snus, myself - so I've been a little bummed lately that I haven't been able to find it. Today, I spoke with my friend at Mellgren's Fine Tobacco to see what I could find out.  They told me that it isn't “discontinued” yet, it’s still undecided.  It's just not currently in production.  The factory they used would only produce it if they ordered it in very large quantities, and they didn’t want to do that at this time. So they’re looking into finding someone else to produce it for them. Their goal is to produce it in smaller batches.  So, if you're like me, I'm hopeful that we'll see it return, but it seems to be in production limbo at this time.  I'll update this article as I find out more information!
Posted by Chad Jones at 1:41 PM