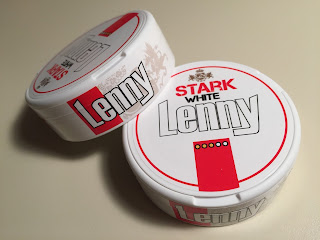 The Lenny brand has proved to be quite popular amongst snusers, so popular that GN Tobacco has released a Stark White Portion version. In the past, I reviewed Lenny's Cut Original Portion and Lenny's Cut Los. It appears with this one they have dropped the "Cut" name and simply titled this one "Lenny". At this time, I still have no idea who Lenny is. Now, as of the date of writing this article, I haven't seen this product for sale anywhere, nor have I seen a product description of it. The product description of Lenny Original Portion from Snus24 says it has a "classic tobacco flavor and a slight tinge of citrus". 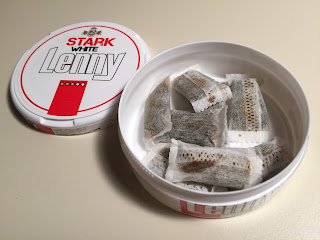 One interesting thing about this one is that it is a white portion. GN Tobacco has commonly made white dry portions until recently, but they are now starting to release more white portions. Lenny Stark White comes in a 13 gram can.  The portions have a decent amount of tobacco in them and are pretty comfortable in the lip!  Upon opening the can I notice a smell of pepper, a light sweet floral smell and a touch of citrus.  Lenny is a budget snus, but the flavor is anything but.  The pepper taste is pretty present, as is a nice tobacco flavor.  I notice a citrus flavor, but it's closer to orange than bergamot.  Along with that there is a light floral taste present, as well.  It's a pretty good tasting snus.  I don't know the nicotine content, but going by feel I'd say it's around 15mg/g-17mg/g.  I did feel a nice kick from this one that came on pretty quickly.

As far as budget brands go, this one has a pretty good taste.  I'd definitely suggest checking it out!
Posted by Chad Jones at 9:53 AM