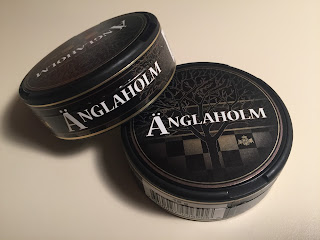 Änglaholm is a brand new product from GN Tobacco and one that I've been looking forward to for a while. First of all, the name. I'm not entirely sure, but from what I've gathered, Ängelholm is a town in Skåne County in Sweden. I'm not sure if that's what they were going for, but that's what I've been able to find out so far. Änglaholm comes in an 18 gram can and the nicotine strength is 12mg/g. The only shop I've seen this for sale at that ships to the US is Snus24. The product description says it has a "taste of Cornel and Berry (sour)."  Now, if you're like me, you've probably never heard of Cornel.  So, for those who are new to this berry, I'll give a little background. 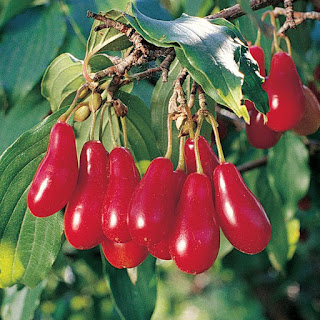 Cornelian Cherries are usually just called cornels. They grow on a tree, which is somehow distantly related to an American dogwood. The plant is native to the Black Sea area and often grows in Siberia. The fruit itself is tiny and has a big pit, much like you would see with black olives. I’ve been told the flavor is a cross between a cranberry and a cherry by those who have had cornels. I’ve heard they’re very popular in Greece, Russia and Ukraine, as well. I’ve never had one before, personally. 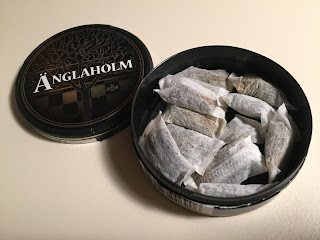 Änglaholm comes in white portion format, which is something new GN Tobacco is doing. In the past, they primarily focused on the white dry format, so this is a new venture for them.  When you open the can, the aroma that comes through is a mild cherry smell with a gentle fruit medley in the background.  The portion are quite soft to the touch and contain a good amount of tobacco. They feel very comfortable in the lip, as well.  Now, the flavor description says that there is some sour in the flavor, but I don't notice so much of that.  What's interesting to me is how much this snus tastes like another product many of you are probably familiar with: Roda Lacket White Portion.  It isn't a clone by any means, but I do detect a similar dried fruit flavor that I noticed with Roda Lacket.  I would say the difference, however, is that there is more of a dialed up cherry flavor, as well.  The thing I like about this is that the cherry/fruit flavor isn't too sweet - it comes through in a very pleasant way.  Though the nicotine strength is listed as 12mg/g, I would say it feels closer to regular strength of 8mg/g.

I can say this, this is probably my favorite product GN Tobacco has released to date.  It has a very high quality can, a great portion and a fantastic flavor.  This is a top shelf, premium snus offering, in my opinion.  I definitely suggest lovers of Roda Lacket White Portion give this one a try!
Posted by Chad Jones at 9:10 AM