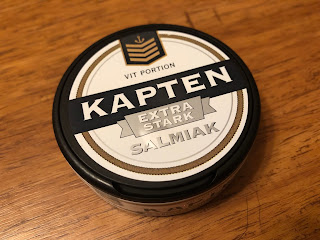 I originally reviewed this a few years ago and this is a snus that has really grown on me.  When I first reviewed it, it didn't stand out much.  But over time, it's become one of my favorite licorice/salmiak flavored products on the market.   SnusCENTRAL.com had it on sale a while back and I bought a few rolls of it, and I've kept it in my freezer ever since.  It's not a full time snus for me, but it's one I use when I get a craving for salty black licorice!  The flavor description for this product says, "Kapten White Extra Strong Salmiak Portion Snus is described as a truly traditional licorice snus with a stronger taste which has been given a modern twist."   This product comes in an 18 gram can with 20 portions for 0.9 gram portions. The nicotine content is 15mg/g (1.5%) which breaks down to 13.5mg/portion. 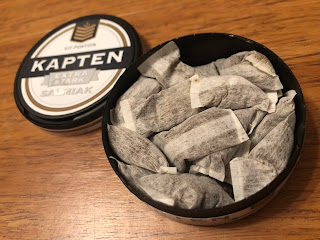 When you open the can, the aroma that greets you is a clear, present smell of black licorice. It's not overly sweet, either, which I dig. I really like the portions as well; AG Snus white portions are nice and plump, and though they only have 0.9 grams of tobacco they still fill out the lip quite well! The taste is a nice, present flavor of black licorice. It's saltier than your average licorice product, which I really like. There is a mild tobacco character in the background, as well. As far as the flavor goes, they last a little over an hour on average, so I can get a good amount of life out of these! The nicotine strength feels to be a little above the strong level, so it has a stronger kick than your regular strength snus!

If you like licorice flavored snus, this is a must try.  It's one of the better licorice products on the market, and one of my favorite products from AG Snus!
Posted by Chad Jones at 2:42 PM