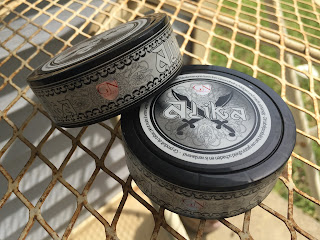 Alika is a new chewing tobacco product from GN Tobacco. It is made to be a comparable product to Makla Ifrikia. I was told by GN Tobacco that they created it for the French market and hope to have it distributed by Altadice in France. They estimate the nicotine content to be at 12.5 mg/g but say that it is different from snus because the base is not only the tobacco but other compounds. In fact, the bottom of the can says the product is 35% tobacco and 65% "texture agent". GNT says the difference from Makla is that Alika is pasteurized, but they kept the important processes used in Makla. The only store I've seen this product listed are SnusWorld.ch and OdensSnus.com. The product description on SnusWorld.ch says, "Alika is the new chewing Tobacco in the market since 2 weeks from now. It's a very good alternative to Makla Africaine Bentchicou (Platinum) product with 40 gr of pure pleasure."  This product comes in a 40 gram can, compared to the 25 gram can that Makla usually comes in. 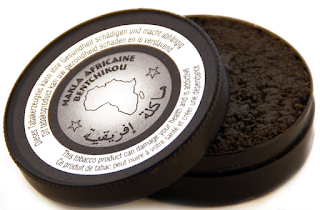 For those who aren't familiar with Makla, I'll give a little background before we get into the review. It has a consistency similar to snus. The cans are smaller, they come in 25 gram cans.  I've been told that the nicotine content is 14mg/g of nicotine, or 2.81% nicotine based on the dry weight measurement. It has a pH level of 10.9 so the nicotine kick is pretty hard and fast. It's a chewing tobacco produced in Belgium and is sold in the EU as a snus alternative, since it is called "chewing tobacco" it is legal within the EU. I personally didn't enjoy it much when I had it last time, but I know a lot of people who use it and enjoy it.  SnusWorld.ch  mentioned that this one is similar to Makla Africane Bentchicou, which is described by MrSnuff.com as "quite a vigorous mixture, though its gentle conditioning gives it more roundness, thus making it softer than its Ifrikia cousin. A definite best seller!" 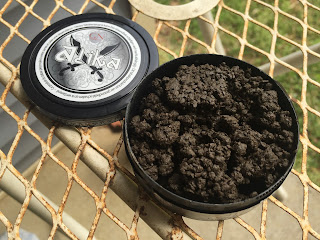 Opening up the can, you'll notice it has a pretty coarse grind. The first few times I had it I just grabbed a pinch of it and put it in my lip, since it was already pretty clumpy. I will admit it is quite easy to handbake.  It also stays together really well in the lip.  I remember Makla to be quite strong, so I assumed this would be as well and used small pinches.  The aroma is quite sharp, but comes through as a raw, earthy and natural tobacco smell.  For 12.5 mg/g of nicotine, I found the kick to be pretty substantial in the smaller prillas I've been using.  I did bake a full 1 gram prilla just to try it out and found it to be a fast, hard kick of nicotine, so this can be quite strong depending on how big of a prilla you use.  I did find the smaller prillas I made delivered a solid amount of nicotine in a way that wasn't too much of a head rush.  I didn't notice as much of a burn when I put this in the lip as I did the last time I tried Makla, either.  I found the taste to be a lot more pleasant than Makla, as well.  It's been years since I've had it, but I remember the taste of Makla to not be that great; the flavor of Alika is a lot more smooth and mellow.  The taste is a pretty mild earthy tobacco taste.  It comes through as a really natural, raw tobacco flavor, but in a smooth way.  There's a little bit of salt in the flavor but I didn't notice as much as I do with regular Swedish Snus.

In the end, I really enjoyed Alika.  I found the flavor to be much better than Makla, and I'm glad it comes in a full sized 40 gram can.  This is a pretty tobacco centric snus - from the smell to the raw, earthy, natural tobacco taste.  If you're somewhere that can get ahold of this product, I suggest trying it out if you like tobacco based flavors.  It's pretty good stuff!
Posted by Chad Jones at 2:24 PM