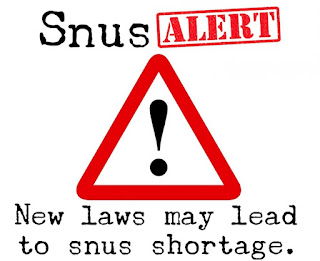 News is starting to get out about an impending snus shortage.  Today, we saw two pieces that speak to this.  One is a recent piece in Aftonbladet.se says that new legislative changes are likely to lead to a snus shortage. The other piece comes from Expressen.se, which says snus is likely to run out by mid-summer.  As an American snus user who orders products online, this is something that concerns me, as this is coming up very soon.  I'm somebody who usually orders every few months, but it looks like coming up on my next order I may need to get extra in the event that the web stores run out, or in the event that local snus sold in the US is affected, which at this time I'm not sure whether or not it will be.  I can't predict what will happen, however I can share this information because it is concerning and in the event this does affect snus distribution I do believe it would be wise for consumers to stock up on their favorite brands in the event that something does happen. 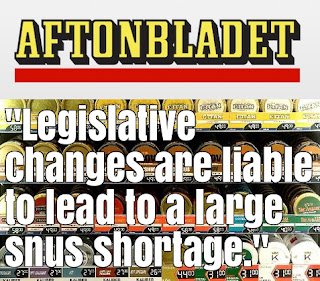 It can be the result of the new Tobacco Act by Parliament hammer through.  "Perhaps [people] should begin hoarding their favorite brands so that they will not remain without a period", says Hildingsson, Communications tobacco manufacturer Swedish Match.

In early April this year Parliament clubbed through the new Tobacco Act, which is an adaptation to the EU directive on tobacco products. After a consultation with the legal regulations presented the Public Health Agency yesterday what will apply - and snus manufacturers will have very busy days.

If more than three weeks on May 20, must snus packages to be updated with warnings similar to those already on cigarette packages. In addition, the boxes do not indicate how much nicotine snus contain.

"Some products have entered the lower levels of nicotine to be marketed as more healthy, which is not allowed under the rules which the European Commission has produced. Now adapted to Swedish law provisions", says Josefin Jonsson, head of the unit for alcohol and tobacco supervision of the Public Health Agency.

The manufacturer Swedish Match is one very critical of the short transition phase.  "I have never had any other case where a nutritional forced conversion of three weeks. As we see it, it becomes impossible to carry out the conversion of four weeks for the marking of packaging", says Hildingsson, Communications at Swedish Match.

Snus boxes of out of date marking in stock in stores on May 20 must continue to be sold until May 20, 2017. But for manufacturers - and ultimately consumers - it does not help much when the turnover is very high, with over five million fabricated boxes each week.

The Public Health Agency believes that the short transition phase will depend on the legislative process.  "Yes, it's very short. But we have not had a tobacco law in place until the middle of April and before the agency has not authority to influence the process. We have been working in a very hectic pace to get clear", says Josefin Jonsson at the Public Health Agency.

"Start hoarding"
The new law makes snus manufacturers are forced to produce new labels with warnings and updated contents declaration to their boxes. What does this mean for all consumers?

"We will not be able to have legal products for May 20 It takes time to get new labels and packaging production. But we will do our best and make every effort to meet the law", says Hildingsson.

So it will echo plot of snus shelves?
We will not be able to face the problem of our entire range. For the industry at large will it be to trade either selling it illegally, or there is no snus in store.

Should snus users start hoarding?
Yes, that might be the answer. To begin to hoard their favorite brands so that they will not remain without a period.

"Been very aware"
Swedish Match is hoped now that the Public Health Agency and Public Health Gabriel Wikstrom a review of the situation. According to the minister's press secretary, it is because the short conversion time of the EU. "This is an EU directive that was negotiated in 2013 and adopted in spring 2014. The national commission presented its proposals for implementation in February 2015. I understand that it can feel like short on time, but snus manufacturers have been well aware of it this has been the time and date of the directive is to be implemented", says Helena Paues, press secretary of Public Health, Gabriel Wikström. 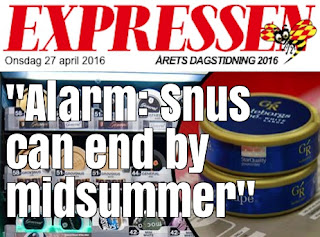 Original Article:  (Link)
Snus can end the summer! New, sudden rules for labels on the snus can means that production can be required to end May 20

"There is no chance that we have time to switch production. We are sitting in emergency session at the moment", says Henrik Jakobsson, CEO of Gotlandssnus. Following a decision by the European Union sent the Public Health Agency on Tuesday night issued guidelines to the country's snus producers on new rules for warning labels on cans of snus. But the catch is that the new rules enter into force from May 20 - if only just over three weeks. Then it will be illegal to sell snus out boxes that are produced after that date and that do not have the new labels. Just snus which is made before the 20th of May and already left the factories to be sold - as long as supplies last.

Patrik Strömer is secretary general of the Swedish snus manufacturing association. "This is a sly blow. We must have a longer transitional period", he says. He predicts that the snus in existing bearings 20 May, will last until midsummer. Three, four weeks, maybe by midsummer, he says.

Stop in Production
Henrik Jakobsson, CEO of Gotlandssnus, one of the smaller companies on the market which produces around 100,000 boxes a week. He is very concerned about the new directives that may stop the entire production. "We will not have time until then. It is unreasonable time. It is absolutely impossible. I do not understand how they think", he says. Changing labels is more difficult than it sounds, he says. It is about a new design of labels, order at the printing, delivery and converting machines. Previously it has been sufficient to snus cans have a warning label on the bottom, but now must also be equipped with edge warning, on the so-called banner. "It will not work", says Henrik Jakobson. He says that the company is in crisis meeting to address the problem. We have no new labels so we can not produce snus after 20 May he says. The layer that his company will have produced up to 20 May, will only last a few more weeks. Then it's out of Gotlandssnus in stores. Henrik Jakobsson does not question the proposal, but wonders why the Public Health Institute sent out new guidelines so late.

Government Error
Josefin Jonsson is head of the Public Health Institute and is responsible for tobacco issues. She blames the lack of urgency on the parliament and the government to delay in making a decision. She says that the new EU directive, which came two years ago, has required changes in the Swedish Tobacco Act. "If we are to act, we must have a government and parliament adopted laws and regulations and we were in the middle of April", she explains. "When we got the opportunity to lay down rules on this, and we have done very quickly", says Josefin Jonsson. Swedish Match is a giant on the Swedish snus market and controls around 70 percent. Even where one is skeptical of the ability to set on the label label to May 20. "We will not have time to switch production. This is very remarkable", says Hildingsson the communications department at Swedish Match. He fears a shortage of snus after May 20. "Snus is to be fresh. Our stock will only last a few days. We will see a situation where all brands are on the market", he says.

Freezing Snus
He now recommends Swedish snus lovers to hoard the safe side - and freeze snus. "I have the advantage over the summer. I think it is good with a cold pouch from the freezer", he says. Patrik Strömer on Swedish snus manufacturing association feels that Swedish snus is a henpecked group. "Yes, politically, we are by our present government", he says.