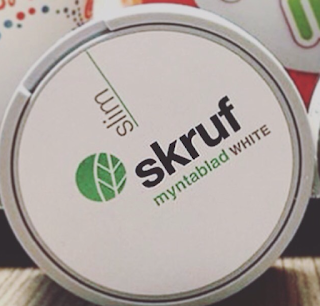 I recently found out about a new Skruf product via "mikaelnorrgard" on Instagram called Skruf Myntabald.  This was news to me so I reached out to our contact at Skruf and was able to find out more information about two new released from Skruf!

There will be two new products launched for the Norwegian market, called “hint of flavour".   I was told that the flavor profile of products in this range "will fall between traditional snus, such as Skruf Stark Portion, and flavored snus, such as Skruf Slim Fresh".   What makes these products different is that the flavored ingredients are included in the tobacco blend during the primary phase, much like with Skruf Slim Mynta (Ecological), which uses actual mint leaves in the production phase.   There are two new products. The first one is Skruf Slim Myntablad White, which is now available.  The second one is coming in May and is called Skruf Slim Rålakrits White. Rålakrits is Swedish for licorice root.

I should have these products in my hand soon and will post reviews once I've tried them!
Posted by Chad Jones at 5:42 AM