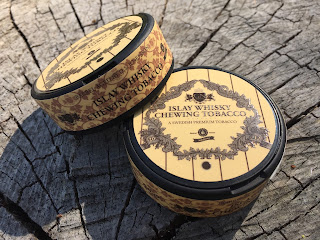 It feels like ages since I've reviewed Islay Whisky Snus, I can't believe it's been 2 years since it was launched! In October of last year I wrote a preview of it, but until this month I haven't been able to find any. A special thanks to our friend Rolf who sent us a few cans from Denmark to review.  The popularity of chewing tobacco is on the rise as chewing tobacco is legal in the EU and snus is not.  Lately, more snus companies have been branding their snus products as "chewing tobacco" to keep them legal to sell within the EU.  Even though it's the same product, the fact that it has a different name suddenly makes it legal.  Yes, that's the EU for you. 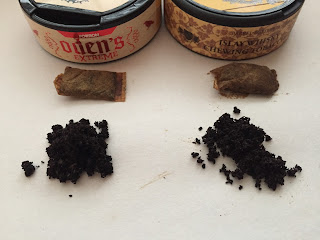 I didn't have a can of Islay Whisky Snus to compare this with, but I did have a can of Oden's Snus, and since they're both made by GN Tobacco I figured it would be a pretty accurate comparison.  Looking at the pouches, they look virtually identical.  The Islay Whisky Chewing Tobacco is a little more moist, but the portion material itself is pretty much the same.  Looking at the tobacco and comparing the snus to the "chewing tobacco", again, they look and feel virtually identical.  There is honestly no distinguishable difference between the two other than the names. 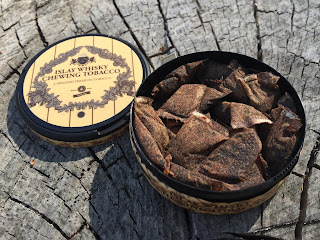 The Islay Whisky Chewing Tobacco pouches are quite moist.  Whenever you pull a pouch out of the can you'll notice that it leaves your fingers with a little tobacco juice.  The portion itself feels identical to snus in the lip, it's quite soft and pretty decent in size.  The aroma of Islay Whisky Chewing Tobacco is pretty identical to Islay Whisky Snus.  There is a dark, rich tobacco smell, a hint of peat, a mild whisky smell and a little smoke.  The nicotine feels a little stronger than the average snus, but not quite up to the extra strong level.  The flavor is, again, identical to Islay Whisky Snus.  There is a dark, rich, earthy tobacco flavor accompanied by a little bit of peat and some smoke.  The whisky flavor comes through in a mild way without a bunch of sweetness.  There is a little salt in the background, but not too much.  Honestly, there isn't any difference in the taste between this and Islay Whisky Snus.

If you're somewhere where you can get this product and don't have access to snus, definitely give it a try.
Posted by Chad Jones at 4:16 PM