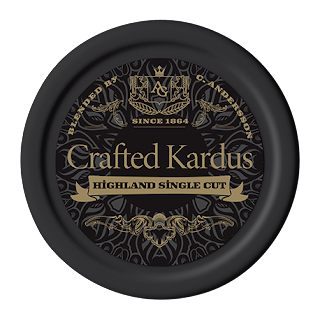 It appears that our friend Conny Andersson is back at it again with a new release from AG Snus! After releasing Crafted Snus Whisky last year, it appears that Conny is releasing another new product - Crafted Kardus Highland Single Cut! The flavor description says, "Crafted Kardus Highland Single Cut snus is a collaboration between the AG Snuff and Conny Andersson. With our common interest in crafts and tobacco of the utmost quality, we have seasoned this craft tasty snus with tobacco that is otherwise only used as pipe and cigar tobacco."  That doesn't say much about the flavor, however.

Once I have more details about the product, I'll update this post!
Posted by Chad Jones at 5:10 PM