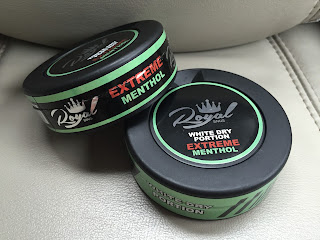 If you've been reading my blog long, you know that when I'm sick I usually lean towards menthol/eucalyptus snus. It was very interesting that this snus showed up about the same time I came down with a cold. So, I felt like there was no better time to review it than the present! If you've never heard of Royal Snus, it's a private label snus that I believe is made by V2. I reviewed their original portion, white dry portion and los not too long ago. In addition to this one, they also have a new release of Royal Snus Lemon which I'll be reviewing this week.  What interested me most about this product is that it is a menthol snus, which I haven't seen much of before, as well as a strong, white dry portion.  The last time I saw a strong menthol/eucalytpus snus was the Thunder Limited Edition 2014 release of Thunder Eucalyptus. So, needless to say I was pretty excited about this one. Every now and then I want something strong, and it's nice to have this to be my "strong snus" when I'm feeling under the weather. 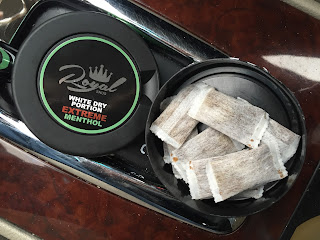 If you've never had a white dry snus before, this is basically a white portion with less moisture. White dry helps relieve tax burden where snus is taxed by weight and the portions also last considerably longer due to the lower moisture amount. With these, I've been able to keep them in for up to 2 hours. With me being sick the past few days, this snus has gotten a lot of usage!

When you open the can, the aroma that comes through is a straightforward menthol smell.  The aroma is relatively mild, but pleasant.  When you put the portion in your lip you'll notice a nice, gentle cooling sensation that expands throughout your mouth.  The flavor is definitely a menthol taste, but not too medicinal tasting.  It's relatively mild, but enjoyable.  The nicotine kick isn't too strong, but you'll notice it to be a little stronger than your average strength Swedish Snus.  I didn't notice any eucalyptus in the taste, however, I did notice a faint hint of tobacco at about the 1 hour mark.

If you're a fan of menthol, or someone who uses snus products like this whenever you're feeling under the weather, I suggest checking it out.  I haven't seen it for sale online yet, but I'm sure it'll pop up somewhere eventually.
Posted by Chad Jones at 7:58 AM