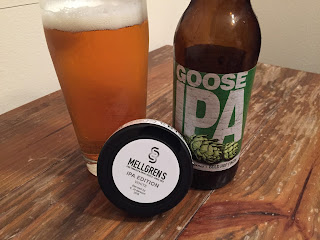 This is a snus I've been looking forward to for quite some time now, and the day is finally upon us. Conny Andersson's latest creation has been unleashed! Last year, I reviewed Mellgren's IPA Edition (Single Cut), but Conny wasn't happy with that and commissioned a second batch. This batch comes in Single Cut and also in White Portion! Those of you who know me know that IPA is my favorite style of beer, so this snus is something that I have been more excited about than usual.  Conny produced this snus at AG Snus and labeled it for Mellgren's Fine Tobacco in Sweden.  This snus was inspired by an IPA that Conny is particularly fond of, Ballast Point Sculpin.  However, for these reviews, I've been enjoying this snus with some IPAs that I enjoy - Goose IPA out of Chicago and Schlafly's Grapefruit IPA out of St. Louis. 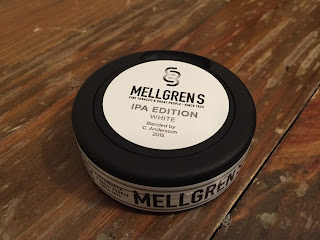 For those of you who have been wanting to try this, it's available online to the US via SnusCENTRAL.com and the EU via TopSnus.com. Mellgren's IPA snus is made of tobaccos from four different sources. Mata Norte from Brazil which contributes sweetness and chocolate tones. There’s also tobacco from Nueva Concepcion in Guatemala which contributes elements of chocolate, nut and fruitiness. There’s Amish tobacco from Lancaster which contributes leather and earthy tones. And lastly, there’s tobacco from South Africa which is the backbone of the tobacco blend. It contributes more tobacco taste and a higher nicotine content. 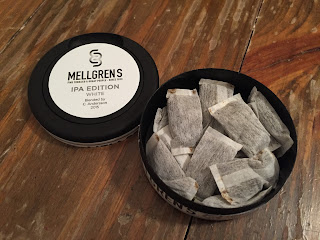 When you open the can, you'll notice the white portions are slightly larger than your average white portion. The portion material is very soft and comfortable in the lip. When I look for an IPA, there are three things I look for: a citrus flavor, preferably bitter or tropical, a taste of pine, and a strong taste of hops. I am pleased to say I noticed all those things in this snus.

The aroma that comes through upon opening the can is a smell of hops, a slight herbal smell, a touch of citrus, and a slightly sweet floral presence.  The taste is the stuff dreams are made of.  Right off the bat you'll notice the taste of hops.  That flavor is in the front and stays with you the whole time you have the snus in.  I also notice a taste of citrus that is a mix of slightly bitter and slightly tropical.  There's also a nice taste of pepper in the background, a little herbal character, and a light but slightly sweet floral presence.  In addition to all that is a gentle presence of pine.  I can't stress this enough, this snus is the perfect snus to pair with an IPA.  Conny absolutely nailed this flavor.  However, I would still use this snus even if I wasn't pairing it with a beer because I appreciate the flavors that an IPA offers.

If you're a beer drinker, you absolutely have to try this snus out.  It is delicious.  However, even if you're not a beer drinker, I would still suggest giving it a go.  The flavor is complex and something that even non-beer drinkers would enjoy.  I give it two thumbs up and a raised glass!
Posted by Chad Jones at 6:51 PM