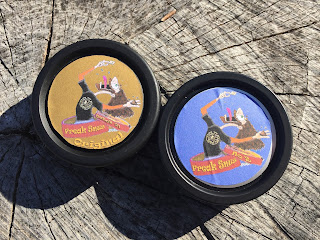 I've been really looking forward to trying this snus. Most of you are familiar with SnusFreak, he's a well known YouTube snus reviewer as well as a friend of mine.  He's made his own snus, and sent a few cans for me to try out and I wanted to do a review of each one for him.  I review snus all the time that is made by big snus companies, so I always enjoy getting ahold of a true craft/small batch snus to review!  He sent two products - FreakSnus Original Batch 1, which is an unflavored los snus as well as FreakSnus No2, which is flavored with lemon and pepper. 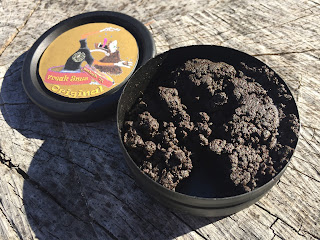 FreakSnus Original Batch 01 is SnusFreak's unflavored los creation.  This is the one that I was the most excited to try out.  There really aren't many snus products out there that are pure and simple tobacco.  It seems these days snus manufacturers add flavor upon flavor instead of just relying on the natural, beautiful taste of the tobacco!

I really dig the grind of this one.  It's a really coarse grind and really easy to hand bake.  The moisture content is top notch, and the prilla stays together really well in the lip.  The aroma is a pure, mellow, earthy tobacco smell.  It reminds me a lot of the smell of pipe tobacco.  The flavor is as pure as it gets.  It's just a mild, straightforward tobacco taste with a little bit of salt.  No added flavors, no hints of anything, just pure and simple tobacco.  Much like with the aroma, it reminds me of pipe tobacco, which I love.  I haven't ever had a snus that reminded me of good pipe tobacco, so I really dig the flavor of this one.  Of the two, this one was absolutely my favorite! 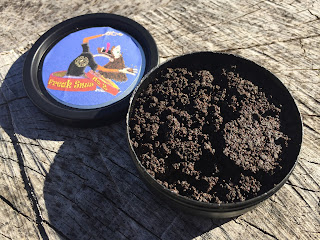 FreakSnus No2 is a flavored los snus.  He flavored this one with lemon and pepper.  The grind is a little finer than FreakSnus Original Batch 01, but still pretty easy to work with and handbake.  Much like with the other one, the moisture amount is very satisfactory, and the prillas stay together well in the lip.

When I opened the can of this one, a very mild tobacco smell came through, much like the pipe tobacco smell I noticed in Original Batch 01.  There's also a natural but tart lemon smell that comes through.  The flavor is a very nice pairing of earthy, mild tobacco and a natural, tart lemon flavor with just a touch of pepper that adds a nice little bite in the finish.  There haven't been many lemon flavored snus products released, and the last one I recall is The Lab Fresh: Lemon.  I like this one a little bit more, however, because I can taste tobacco and lemon, and the two flavors pair really well together.

Thanks to SnusFreak for sending me these, I enjoyed them both quite a lot!  I look forward to seeing more of his creations in the future!
Posted by Chad Jones at 12:37 PM