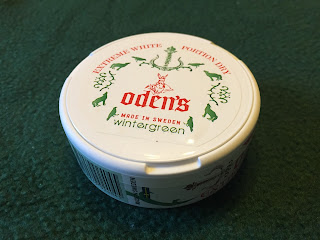 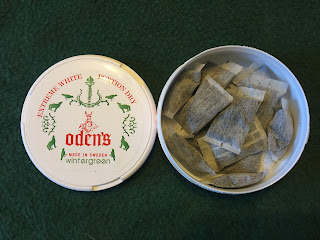 Being a white dry product, this one has less moisture than a regular white portion. That does two things: it makes it cheaper in places where snus is taxed based on weight, and it also alters the way the snus works. The flavor and nicotine develop slower but it also lasts a lot longer. Once the portion gets more moist, it works much like a regular portion does.  When you open a can of Oden's Wintergreen Extreme White Dry, the aroma is a straightforward wintergreen smell, but a little bit more gentle than the Extreme Original Portion version.  The portion has a little burn in the lip, which is interesting as I didn't notice that with the original portion version.  The flavor develops slowly, but is a mild wintergreen taste.  There isn't much else going on with the flavor, it's pretty much a straightforward wintergreen taste, much like you would taste with Copenhagen or any other American wintergreen flavor.  If you're a fan of wintergreen and want to enjoy it in a dryer white portion with a lot of nicotine, you may enjoy this snus!  For me personally, not being a fan of wintergreen, it's not something I would personally use again.
Posted by Chad Jones at 2:39 PM