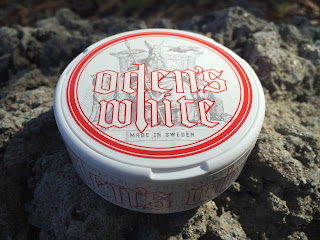 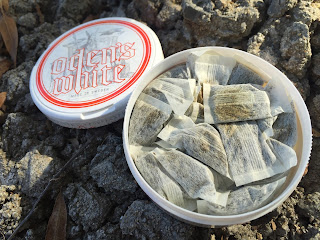 Opening up the can, you will notice that the portions look much like any other companies regular white portion. You can tell that they have more moisture than GNT’s other “White Dry” format products. The aroma is a very gentle and mild spearmint smell. It doesn’t seem to have as much sweetness to it as other spearmint snus products I’ve had in the past. The portions are quite plump and full, and upon putting one in the lip you’ll notice how soft they feel. There isn’t as much of a cooling sensation/tingle to these as I’ve noticed in the past with other mint snus flavors but there is a very mild burn. The taste of this one is also much more mild and gentle. It’s a straightforward spearmint taste, but it doesn’t have a lot of sweetness to it. Being an Extreme Portion, it does have a solid nicotine kick, as well. This definitely ranks pretty highly for me in terms of mint snus products. The can design is fantastic, and the aroma and flavor are predominantly spearmint but not too bold or sweet, which is a problem and drawback to many other mint flavored snus on the market.  Being an extreme product, this snus also comes with a strong nicotine kick!

This is definitely something I would order again!  If you're a fan of mint snus with high nicotine, give this one a try!
Posted by Chad Jones at 3:44 PM