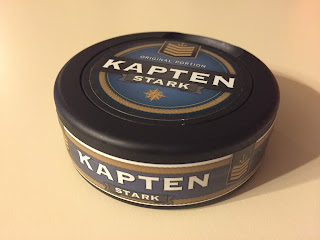 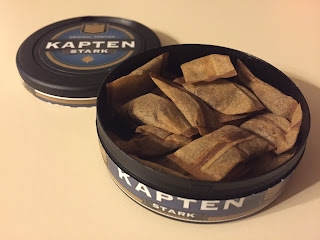 The flavor description of Kapten Original Stark Portion says, "Kapten Original Stark Portion is a pouch where the classic tobacco rounded character with a higher nicotine content and robust servings". This one has a nicotine content of 16mg/g. The portions look a lot like, as I mentioned before, the old V2 portions from 2009. When you open a can, the aroma is a mild tobacco smell with hints of pepper and a light bergamot smell with a little floral sweetness. The portions are incredibly soft and feel great in the lip. The taste is a well rounded tobacco taste with a very present pepper flavor and a little salt.  The bergamot taste is much milder than most traditional Swedish snuses, and the floral notes are very light but compliment the taste very well!  Being a Stark Portion, this one is stronger than an Original Portion, so it has a little kick to it!
Posted by Chad Jones at 6:18 PM