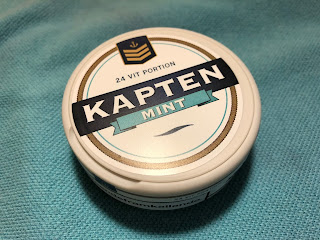 It's been several years since I've reviewed the Kapten line, and I figured it was time to re-visit it! Kapten is AG Snus's flagship line; a majority of their products fall under the Kapten label. AG Snus describes Kapten as "a novel snus, but the development has been based on the knowhow acquired by 5 generations’ experience manufacturing snus. Kapten is a truly traditional snus, but the taste has been given a modern twist making Kapten a snus of this century."  When it comes to Kapten Mint White, the flavor description says, "Kapten Mint White is a truly traditional snus with a taste of mint, but the taste has been given a modern twist.” By "traditional" and "modern twist", AG Snus means that this mint product also has a bergamot and tobacco taste; along with the mint flavor. This product comes in a a 16.8 gram can with 24 portions for 0.7 gram portions. The nicotine strength is 10mg/g (1.0%) which breaks down to 7mg/portion. 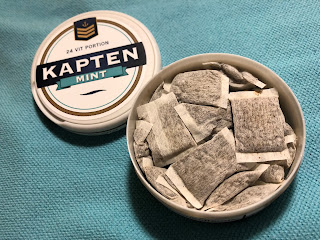 When you open the can, the aroma that greets you is a gentle aroma of peppermint, a touch of menthol, and a mild sweetness. The portions are only 0.7 grams, but Kapten portions always feel very large and plump in the lip, it’s one thing I love about this brand. When you put a portion in, you’ll encounter a mild cooling presence in the lip, which is common of mint snus products. The flavor is a mild taste of peppermint with a light touch of sweetness. There’s also a hint of menthol in the background. What’s unique about this one is that there is a very faint touch of citrus in the background, and a mild tobacco character. Usually mint products just have a mint flavor, but this one has a little extra! The nicotine feels to be slightly above regular strength. The flavor also lasts a good amount of time; I’ve found with most Kapten white portions I can keep them in for up to an hour!

If you like mint products and want to try something a little different, this is worth checking out!
Posted by Chad Jones at 6:39 PM