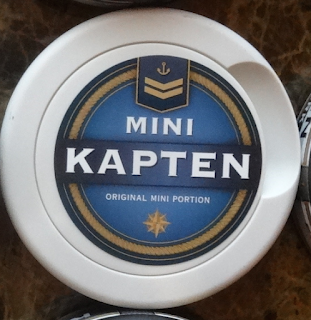 Kapten is the main product line of AG Snus, much like General from Swedish match.  This snus isn't for sale at the time via BuySnus or SnusCENTRAL, but hopefully that will change eventually. If you're in the US, Snus24.com carries a few of these, but not all of them. So these reviews are mostly for a friends across the pond in the EU who are interested in Kapten Snus. 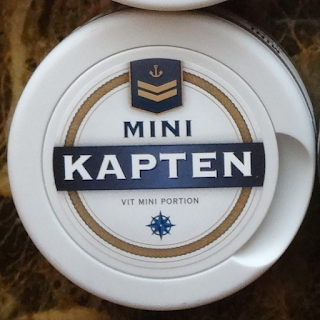 The Kapten brand is described as, "...a snus from the Danish producer AG Snus and builds on knowledge from five generations of tobacco crafts. Kapten Snus is a traditional snus with classic elements like bergamot flavor but has been given a modern touch which makes Kapten a popular and affordable snuff. The product is available in many forms, including Original Portion, White Portion, Mini Pouches and Loose." 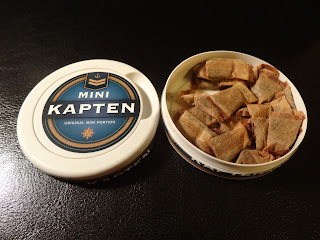 This snus is described as, "...a mini snus with classic tobacco flavor." When you open a can, the aroma that comes through is a mild tobacco smell with a hint of pepper. The portions are very soft and comfortable in the lip. They remind me a lot of the old V2 portions from 5 years ago. The taste is pretty simple - a mild base tobacco flavor with a very present taste of pepper, and a very mild salt balance.  There's a mild hint of bergamot and a very light floral taste, but the tobacco flavor is more present.  These have a nicotine content of 6mg/g, a little above the usual 4mg/g most mini portions have. 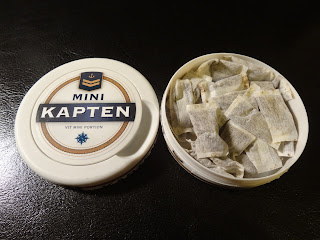 Moving along to the Mini White Portion, This snus is described as, "...a mini snus with classic tobacco flavor." When you open a can, the aroma is a mild tobacco smell with hints of pepper and a light sweetness. The portions are about medium in terms of softness. The flavor takes a bit to develop, but it's a more mellow taste than the Original Portion Mini. A very mild base tobacco flavor with gentle hints of pepper and a little salt.  There are very light notes of bergamot and some mild floral notes, but they are very light.  As with the Mini OP, this one has a nicotine content of 6mg/g.
Posted by Chad Jones at 6:28 PM