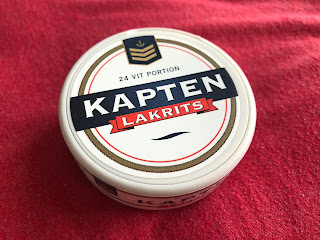 It's been several years since I've reviewed the Kapten line, and I figured it was time to re-visit it! Kapten is AG Snus's flagship line; a majority of their products fall under the Kapten label. AG Snus describes Kapten as "a novel snus, but the development has been based on the knowhow acquired by 5 generations’ experience manufacturing snus. Kapten is a truly traditional snus, but the taste has been given a modern twist making Kapten a snus of this century." When it comes to Kapten Lakrits White, the flavor description says, "Kapten Lakrits White is a truly traditional snus with a taste of licorice, but the taste has been given a modern twist." This product comes in a a 16.8 gram can with 24 portions for 0.7 gram portions. The nicotine strength is 10mg/g (1.0%) which breaks down to 7mg/portion. 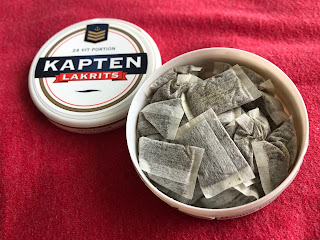 As many of you know, I wasn't a big fan of black licorice until I started using Swedish Snus. It wasn't a very popular flavor here where I live, and I gradually grew to love it after years of using Swedish Snus. As far as licorice products go, this one is pretty solid. When you open the can, the aroma that greets you is a gentle, mild smell of black licorice. One thing I love about Kapten products is that even though the portions aren't a full gram, they still fill out the lip well and feel very plump and fat in the lip. The flavor is predominantly black licorice, which comes through in a gentle way. There is a mild tobacco character in the background, and a nice peppery flavor as well! The nicotine on this one feels to be about regular strength. The flavor lasts a pretty good amount of time; I've found I can usually keep these in for up to an hour! As far as licorice products go, I do enjoy the Kapten Salmiak a little more because it's saltier, but this is still a great tasting snus!

If you're looking for a licorice snus to try, this one is worth checking out!
Posted by Chad Jones at 6:47 PM