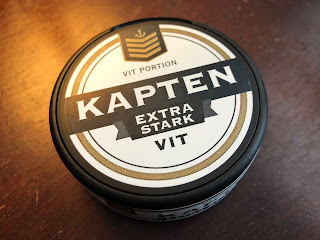 It's been a while since I've reviewed Kapten Extra Stark White, but I've had quite a few people ask me to revisit it so, here we go! One of the reasons I wanted to revisit these products is because of the EU snus ban. There are a few stores that sell these products, but not General. I know a lot of General fans look for a snus with the citrus/tobacco flavor profile to replace General for them and many seem to enjoy Kapten! If you're new to snus, Kapten is the main line from AG Snus, a snus manufacturer in Denmark. AG Snus describes Kapten as "a novel snus, but the development has been based on the knowhow acquired by 5 generations’ experience manufacturing snus. Kapten is a truly traditional snus, but the taste has been given a modern twist making Kapten a snus of this century."

The flavor description of this snus says, "Kapten Extra Strong White Portion is a white portion snus with a taste of bergamot and a high nicotine content."  It comes in an 18 gram can and I counted 22 portions in this can, which would be 0.82g portions.  The nicotine strength is 15mg/g (1.5%) which breaks down to 12.3mg/portion. 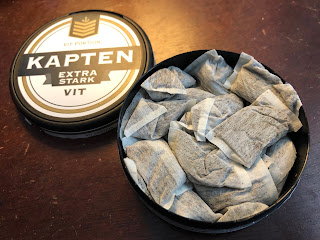 If you've ever had the regular strength Kapten White Portion, this snus reminds me a lot of that one. The aroma is a light, mild smell of citrus, a little floral sweetness, and a present smell of pepper. The portions are soft to the touch, comfortable in the lip, and feel quite plump! The flavor is a mild taste of citrus, a gentle floral sweetness, and light notes of pepper. The longer I have it in the more I notice a mild tobacco character in the background. The nicotine feels stronger than a regular strength product, but not quite extra strong. The flavor itself lasts, on average, between 1 and 1.5 hours; I can get a good amount of usage out of these portions!

If you want a traditional flavored snus with a little extra nicotine, this is a good product to check out! I don't think it's sold to the US anymore, but I have seen it on other e-stores.
Posted by Chad Jones at 6:35 PM