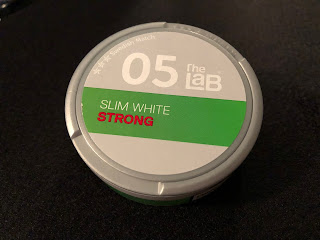 As you may know, the Lab series from Swedish Match has recently gone through a redesign and I figured it was time to give this one a revisit!  The Lab Series was actually my first "big story" on Snubie.com after I started blogging. I was very excited to get a press release from Swedish Match about this new product. The Lab Series was a big deal when it was launched in 2009 - the cans were non-traditional and the portions came in a new format that revolutionized the snus world - the long portion.  It was launched as a "non-traditional" snus, meant to be different from other products on the market.  Now, however, everyone is making long/slim portions, but back then, not many people were doing it. When it comes to the product description for Lab 05 it says "05 White Strong Long Portion Lab Series Snus has a well balanced round tobacco character with hints of green herbs, oak and cedar, and a little nuttiness and flowers."  This product comes in a 21.6 gram can with 24 portions, for 0.9 grams each. The nicotine content is 14mg/g (1.4%), which breaks down to 12.60mg/portion. 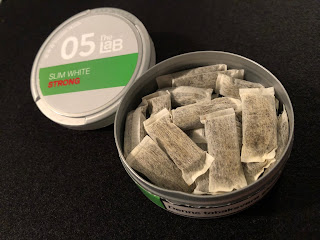 When you open the can a mild tobacco aroma comes through. There’s also a light touch of wood and a gentle nutty presence in the background. The portions are soft the touch and feel comfortable in the lip. The taste starts with a mild, earthy tobacco flavor. The longer you have it in the more you’ll notice a light taste of oak mixing in and a little nuttiness to it. The nutty flavor reminds me of a mild walnut character. The flavor also lasts quite a while; I’ve found I can enjoy this one for up to an hour and a half, which is impressive for a white portion! The nicotine content feels firmly at the strong level; it’s stronger than a regular strength, but not too strong.  If you're a fan of tobacco centric snus, this is definitely a must try.  It has a great taste, a little extra nicotine, and a long lasting flavor.
Posted by Chad Jones at 6:58 AM