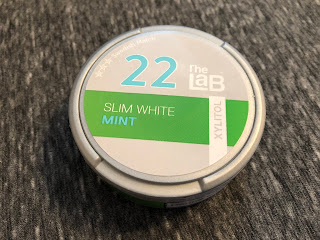 NOTE:  This product has been discontinued, and replaced with Lab 12 Mint Slim White Dry.

This is a rather interesting product as it is the first Swedish Match product to add fluoride and Xylitol. I'm not too familiar with Xylitol so WebMD was a great help. I'll hit the high notes, but you can read up on it if you want to know more. Xylitol is naturally occurring and used as a sugar substitute. Xylitol is also said to prevent tooth decay and can act against some bacterias that cause infections. When it comes to The Lab 22 (Mint), the flavor description says, "The LaB 22 Slim White Mint comes with Xylitol - a natural and tooth friendly sweetener. The taste is that of fresh mint and vanilla flavor." This product comes in a 16.6 gram can with 24 portions, for 0.69 grams each. The nicotine content is 11mg/g (1.1%), which breaks down to 7.61 mg/portion. So while it may sound strong at 11mg/g, it's actually about as strong as a regular strength portion in the nicotine/portion amount. 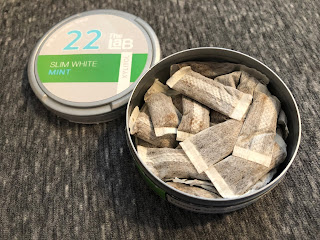 When you open the can there is a very sharp aroma of peppermint and a very mild sweetness in the background. It's hard to explain, probably because I've never had Xylitol, but the best I can explain it is saying it's a mellow sweetness.  The portions feel a little bit dryer than the average white portion, but are still pretty comfortable in the lip.  When you put a portion in the lip there is a mild tingle that comes on, which is common of most mint products.  Lab 22 has a sharp and straightforward flavor of peppermint. I do get very, very mild hints of vanilla in the background but they aren't as bold as I had hoped they would be; honestly I have to dig into the taste to really detect them.  There is a very slight sweetness to the flavor profile, but it's a very mellow sweetness, which I assume is attributed to the Xylitol.  It's a pretty decent tasting snus.  This snus lasts a pretty good amount of time; I've found I can enjoy Lab 22 for a little over an hour.  The nicotine strength, while 11mg/g, feels to be about regular strength.

If you're a health conscious snuser and dig Xylitol, this would be a good product to check out.  As far as flavor goes, it's pretty decent.  It doesn't stand out as amazing by any means, but it's still a pretty good tasting snus!
Posted by Chad Jones at 1:58 PM