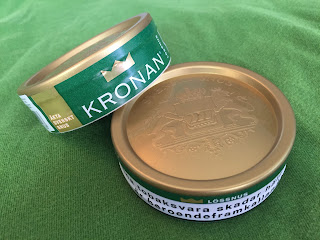 Over the past few weeks, I've been revisiting the entire Kronan line. In August, 2011 I reviewed Kronan Original Portion, in May 2013 I reviewed Kronan Stark Vit, in October 2014 I reviewed Kronan Stark Original, in September 2015 I reviewed Kronan Los, and in November 2014 I reviewed Kronan Vit.  Kronan is a snus I've never been able to get into, but I figured it's been a few years since I've tried most of this line so why not revisit it? After all, I wasn't a big fan of Göteborgs Rapé when I first tried it, but I fell in love with it when I reviewed the Göteborgs Rapé Slim Can version in 2013.  Now, speaking about Kronan, the name  means “the crown” in Swedish. It was created in 2005 as a reaction to the taxes being raised on snus. In fact, one of the Swedish Match tobacco masters was once quoted as saying “We can't really do anything about the taxes but we can cut costs as much as possible while still providing a good product." The product line was redesigned in March 2017, so I figured it was a good time to revisit Kronan!  An interesting note about this one is that it now comes in the star formation! 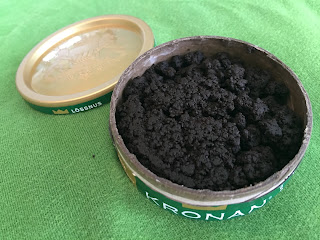 The flavor description for this product says, "Dark tobacco character with elements of violet and citrus, as well as some green herbs." Being a Swedish Match loose product, a can contains 42 grams of snus. The nicotine content is 7.5mg/g (0.75%).

When it comes to the Kronan brand, the los is the best of the entire product line. When you open the can, the aroma that greets you is a rich, dark tobacco smell. There’s a mild presence of violet, and a light herbal hint. Being a Swedish Match loose product, it bakes really well in the hand! The snus stays together very well in the lip with minimal mudslide. The flavor is a rich, dark, earthy tobacco flavor. Being a loose product, the tobacco is the most predominant flavor, which I think is why I consider this one the best. There is a light hint of lemon, a mild herbal taste, and a light presence of dill. As I said earlier, the most present taste with this product is the tobacco, so I think it masks that dill pretty well.  There's also a very light taste of violet in the background.  The flavor lasts a good 45 minutes, which is about how long I usually keep loose in for. The nicotine content also feels to be about regular strength.

Though I said this is the best product of the Kronan line, this snus still isn't for me.  The dill taste is much more mild with this one, but I can still taste it and I think that's what turns me off of this product line.  However, if you want to try Kronan, I suggest this being the product you try.  Now, to do a price comparison at SnusBolaget.se, Kronan Los is priced at 39kr (4.75 USD). Compare that to General Los at 51kr (6.21 USD) and you’ll see that Kronan is a much cheaper alternative for the budget conscious snuser!  However, as with the last 4 Kronan products I reviewed,  I still can't get into Kronan.  But I can say I tried!
Posted by Chad Jones at 1:44 PM