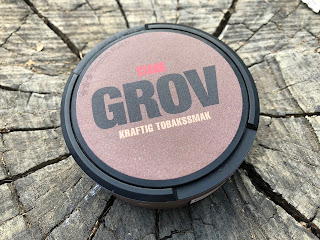 It's been a few years since I've reviewed Grov Stark, but it's always been a personal favorite of mine.  The cans recently went through a redesign, so I figured it was time to revisit them! Grov is one of the oldest snus products still sold today, going all the way back to 1840, and trademarked in 1872!  Grov was originally a los, and launched in the portion format in 1983, and a white portion 20 years later.  Grov Stark is only a few years old, and launched back in 2015.  In the snus world, it seems like there's a debate amongst snusers about which is better - Ettan or Grov.  I'm a Grov guy.

The product description for this snus says, "Grov Stark has a dark and heavy tobacco taste with notes of geranium and dried herbs, along with hints of almonds, wood and tar."  This snus comes in a 24 gram can with 24 plump 1 gram portions.  The nicotine content is 15mg/g (1.5%) which, with one gram portions, easily breaks down to 15mg/portion! 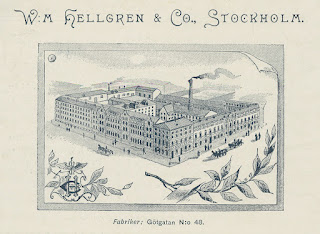 Grov is the product of Willhelm Hellgren, and the story of Grov begins in 1840. Around this time, he was working in a tobacco factory but wanted his own factory, a dream that would come true in 1840. Over time, he developed the Grovsnus brand, which was trademarked in 1872. Grovsnus was so popular that eventually W:m Hellgren & Co was competition to Ettan. The Grovsnus brand was taken over by the Swedish Tobacco Monopoly in 1915, which would eventually become Swedish Match. Grov launched in the portion format in 1983, and white portion format 20 years later. 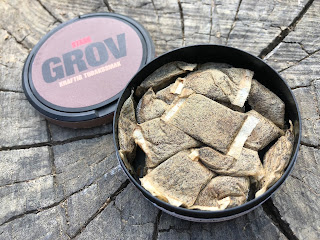 When you open the can, the aroma that greets you is a robust, rich, well rounded tobacco smell. There's also a light wooden presence in the background. The portions are plump, moist, and have a quick release of flavor. The taste is very much tobacco-centric. The tobacco flavor is very present and comes through in a rich, dark, robust way. There's also a light wooden presence in the background, as well. It's a very simple flavor that is focused on that beautiful tobacco taste. The flavor lasts around 45 minutes on average, which is normal for most original portions. The nicotine strength feels to be between a strong and an extra strong. There's a little extra over the regular level, but it's not going to knock you out or anything.

Grov is my favorite tobacco flavored product on the market, and of the portion versions of Grov, this one is easily the best, in my opinion.  If you like the taste of tobacco, this is a must try!
Posted by Chad Jones at 1:21 PM