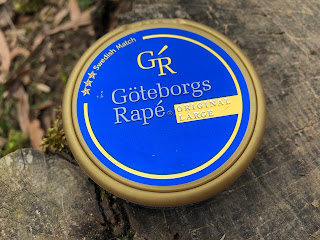 In 2015, Swedish Match relaunched Göteborgs Rapé Original Portion, a product that had not been on the market in a number of years.  When Swedish Match brought it back, they made it slightly dryer and less salty than before, but still with the distinct Göteborgs Rapé flavor intact.  When it launched, it became an instant favorite of mine and has been in my personal rotation ever since then.  In short, it's absolutely delicious.  The flavor description says, "GR' Original portion snus has a gentle tobacco taste with a slight sweetness and an element of fresh herbs and juniper berry."  It comes in a 24 gram can with 24 portions for 1 gram each.  The nicotine content is 9.5mg/g (0.95%) or 9.5mg/portion. 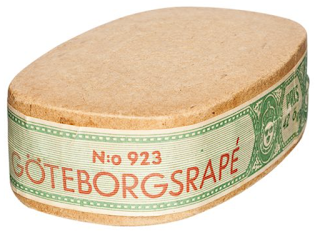 Now, let's talk a little GR history.  As early as the 1850's, there would be various snus mixtures in the ports. Sailors would collect ingredients from their journeys and use them in their various blends. Swedish sailors had a phrase, "The mood of a sailor is as good as the quality of his snus". Göteborgs Rapé originated from one of these blends. In 1915, the Swedish Tobacco Monopoly took over all snus production in Sweden. At that time, there were 103 brands of snus and 25 of them were from Göteborg. A "snus jury" would taste all these brands and narrowed it down to 5 brands. In 1919, Göteborgs Rapé was one of these registered brands, and it launched as Göteborgs Rapé No. 923. When the snus became a factory produced snus it became ground, instead of ripped. The white portion version came in 1997 and Goteborg’s Rape Original relaunched in 2015. 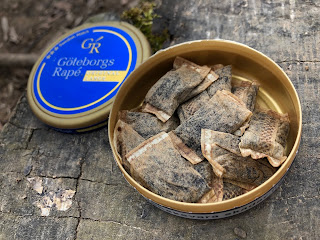 When you open the can, you'll notice the aroma to be much more present than GR White Portion. There's a very present smell of juniper, a slight hint of lemon, and a mildly sweet aroma of flowers and herbs. It smells much like regular GR, but the aroma is more bold and powerful. When you open the can, you'll notice the portions are quite plump and moist. They're very comfortable in the lip and quickly release flavor. The flavor comes on very quickly. The juniper taste is front and center, with the citrus flavor behind it.  The citrus taste is mild but it is detectable. The floral notes come through more clearly in the original portion format than in the white portion, and there is also an herbal hint in the background. There is also a mild, earthy tobacco character in the background, as well. The nicotine strength, though 9.5mg/g, feels to be about the regular strength level. The flavor, on average, lasts about 45 minutes.

I can't say enough good things about this snus.  It's a personal favorite and, in my opinion, one of the best products on the market today.
Posted by Chad Jones at 2:40 PM