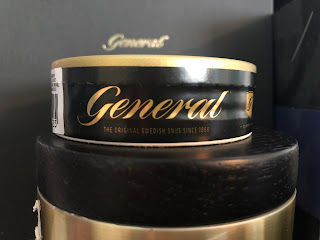 I've been doing a lot of nicotine pouch reviews and portion reviews lately and said to myself that it was time to review some pure, classic snus. And no snus symbolizes that more than General Lös.  When I think of snus, I always think of General; it is the iconic brand.  I've been using General regularly since 2009, so almost 10 years now.  And if you want to taste what snus should taste like - General Lös is what you're looking for.  The flavor description for General Lös says, "General Loose Snus is a powerful and elegant snus. The flavor is a peppery tobacco with hints of citrus zest and balanced tobacco notes."  This snus comes in a 42 gram can with a nicotine strength of 7.5mg/g (0.75%).

The General Snus story goes all the way back to 1849. In 1849, Johan A Boman started a tobacco company which would, in 1861, become JA Boman and Co. In 1866, he would launch General Snus. The story says that Boman wanted to create the best snus the world had ever seen or experienced. Mr. Boman had a magical nose, and was an expert in blending flavors. He was also very patient. To develop General Snus he spent 1500 days developing developing a recipe with 22 types of tobacco, which came from the world’s finest plantations. It also included the addition of a drop of bergamot oil, which complimented the spicy tobacco blend. This is what we know today as General Snus. Today, it is still produced according to his recipe, which remains a closely guarded secret. Round cans launched in 1967, and the portion format launched in 1977. 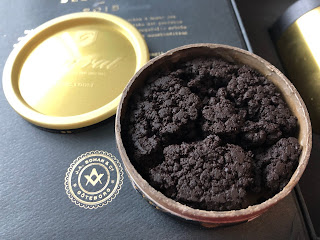 When you open the can, you're greeted by a rich, robust tobacco smell with tart hints of bergamot, a touch of pepper, and a little smoke. Being a Swedish Match lös product, the tobacco itself is incredibly easy to work with and handbake! It goes in the lip easily and stays together really well. The flavor of General Lös is, in my opinion, the classic Swedish Snus flavor. The tobacco taste comes through in a very present way and is rich, well rounded, and earthy. It is accompanied by the flavor of bergamot which comes through in a clear, lightly tart way. There's also a touch of salt in the back, a little pepper spice, and just a faint hint of smokiness. It is absolutely delicious. The nicotine strength, with 1 gram prillas, feels to be about the regular strength level. The flavor lasts about 45 minutes on average, which is about how long I keep my prillas in for.

If you're looking for traditional, classic, pure Swedish Snus flavor - this is the snus to try.  Nothing beats the flavor of General.
Posted by Chad Jones at 12:53 PM