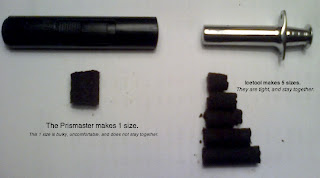 I have been getting into lös more and more lately, and when the opportunity arose for me to buy an Icetool from a fellow snuser for less than retail, I jumped on it. I have been using a Prismaster, and to be honest, I'm not all that good at handbaking. This isn't going to be a "How-To-Lös" blog, but just my thoughts on the Prismaster vs the Icetool, and is it worth spending on 40 bucks on an Icetool when a Prismaster is only a couple bucks?


Well, the answer is yes. To state it as simply as possible, Icetool=win.

NOTE: Even though I don't handbake, here's a few helpful videos from those who do, in case you are curious about how it works.
By Zero, the best handbaking video I have seen.
http://www.youtube.com/watch?v=fNiPqoJOCuI

I didn't know when I would start los, but I eventually came to it when Nordströmmen released that special lös line a few months back, and I couldn't miss out. I picked up a Prismaster and started lössin' like a böss. The Prismaster made me angry. It made me frustrated. I'm glad it was plastic, because it got thrown around alot. As punishment for a messy lösmouth. But, I liked lös, so I just sucked it up. Recently, the situation arose to buy an Icetool, and after receiving it in the mail today and using nothing but lös all day long, I can officially say, nothing beats an Icetool. 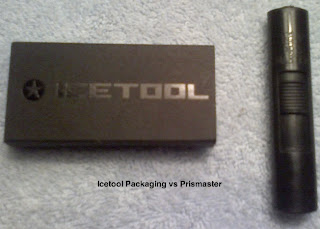 Upon opening up the box and removing the Icetool, I had to sit it next to my Prismaster and compare. I mean, just look at the two. Seriously, look at them. If you were out in public, enjoying a can of Ettan lös, and you pull out an icetool, and pop in a pris, you would draw a little attention. And in a good way. Pull out a big, bulky plastic prismaster, and people might laugh a little. An Icetool is a true thing of beauty.

Ok, I'll quit talking about the equipment itself and move on to what it actually does. The snus. As I said earlier, Prismaster makes a big sloppy mess. A pris that falls apart, slides, and is just uncomfortable. It makes one big, ugly size. I have nothing good to say about it. But the Icetool makes 5 sizes, you can have a nice little pris, or a big fat boy pris if you so desire. And they are VERY well packed. When you put the Icetool under your lip and pop in the portion, it STAYS together. It doesn't slide around, it makes a tight little lösball. It's great.


So what can I say? I love the Icetool. For those of you who want to try los, I can't express how much I think you need to get an Icetool. The Prismaster is a waste of money, handbaking sucks, but the Icetool reigns supreme. In a battle of the two, there is no comparison. The Icetool is a great item, and very much worth the 40 bucks it costs to buy one.