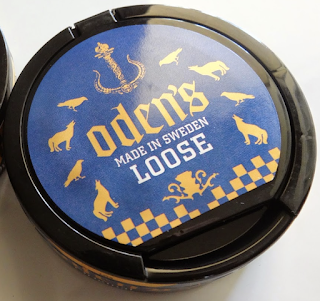 In the portion version, I'm a fan of Oden's Lakrits Portion, so I was looking forward to giving this one a try. I recently did an order from The Northerner and threw a can of each in to try.  One thing that I thought was interesting was that Oden's Lakrits Loose has a catch lid on the can.  I've never known anyone to put used lossnus in a catch lid, and I've never seen another company make a snus can for los that had a catch lid, so it was interesting to see that GN Tobacco did it with the Lakrits los.  The product description for this one says "A taste of Licorice."  Each can weighs 40g, and the nicotine content is 9mg/g. 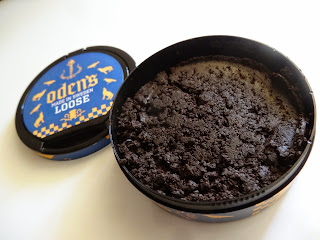 When it comes to lakrits/licorice snus - there's a ton of them out there.  And since I started reviewing snus in 2009 - there's only been two that I'd ordered more than a few times - General Licorice and Oden's Lakrits.  When you open a can, you'll notice it's a fine ground snus, so I suggest using a snus portioning tool.  Giving it a smell, the aroma is of sweet, black licorice.  It tastes like black Jelly Belly jelly beans.  The tobacco taste is more noticeable, it's not bold by any means, but you can taste it in the background.  It blends really well with the sweet licorice taste and the mild salt balance.  The nicotine feels to be around the regular strength level, and I can usually keep this one in for up to 45 minutes!  When it comes to lossnus, if I'm ever craving a licorice one - this is one I'd definitely order again.
Posted by Chad Jones at 12:01 PM