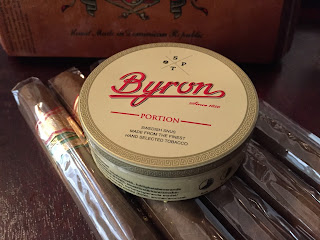 Byron is a Swedish Snus made with Cuban tobacco. In the past, SPT made their Cuban tobacco snus under the brand Montecristo, but recently changed their products over to the Byron brand. The product description says, "Byron Portion is the classic premium snus' best friend. The characteristic flavor takes you on a tour of nineteenth-century Cuba, where cigar spouses and cousins Jose and Eusebio had just opened the first ever Byron plant. Nominally taken the inspiration from the people dear poet Lord Byron. First as an allusion to the almost poetic delicate blend of tobacco, yet as a nod to their British supporters. Today we package the Cuban cigar tradition of snuff format, with fresh hints of bergamot. With a unique box that match snus taste and attitude, we welcome the snuff into first class salon."

Many of you may know, President Barack Obama recently called for an end to the Cuban Embargo and began easing sanctions with Cuba. It's still not legal to buy Cuban products online, although US/Cuban ties have been restored and travel to Cuba should be beginning soon, as well.  From what I understand, it's no longer illegal to own Cuban cigars/tobacco, and you can bring small amounts of Cuban tobacco/cigars back to the US with you, but you can't order it online. 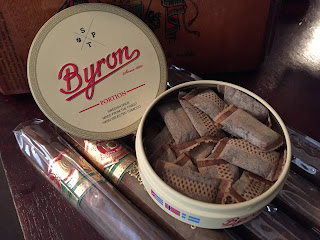 I love this snus. From the can to the portion, everything about it is top notch. Byron Snus comes in a classy metal can. The portions are original portions, but not as moist as most original portions I've had in the past. They're in that sweet spot between a white and an original portion which allows for a steady but bold release of flavor and a lot of endurance for the pouch itself.

Cuban Snus products are very aromatic.  A very present floral and peppery aroma comes through with a mild bergamot smell in the background.  The floral notes and the pepper are front and center in the flavor profile, and underneath that you'll find mild hints of bergamot and a mellow taste of earthy tobacco.  The Cuban tobacco definitely adds a different flavor and aroma to this product than most other Swedish Snus.  It's definitely a more aromatic snus, and the flavor is absolutely delicious.  If you're somewhere that can get this snus, definitely give it a try, it's a great product!
Posted by Chad Jones at 4:35 PM