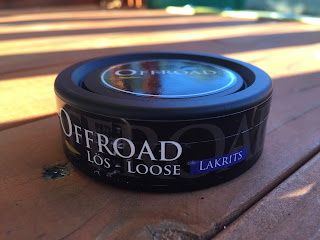 V2 Tobacco has really made some changes over the past few years.  Since moving into their new factory, the product quality of their snus has increased exponentially over what it was when I first started snus back in 2009.  One thing I've always praised V2 for is their nicotine. I wrote this article last night about Swedish Snus and Nicotine and remarked about how good V2 Tobacco is at having their total nicotine levels and free nicotine levels very close.  In simple terms - if they say a product is strong or extra strong, it delivers.  A lot of companies can make an Extra Stark snus that doesn't feel very strong, but with V2 snuses, they definitely deliver.  Today, we'll be reviewing a Lakrits snus from V2 Tobacco that I haven't reviewed before - Offroad Lakrits Los.  This one, however, is a regular strength (8mg/g) snus. 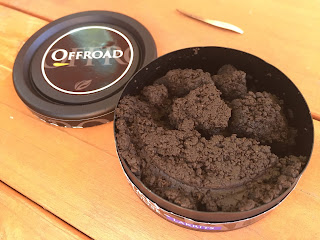 I've always loved the grind of Offroad Los.  Any lossnus under the Offroad brand is very easy to work with - much like the ease of using a Swedish Match los.  No tool is required, just pinch it, form it and throw it in your lip.  When you open the can, the aroma is much like it's portion counterpart, a smell of black licorice, much like a black Jelly Belly  jelly bean.  The flavor is much the same as the portion version, as well.  A very present flavor of licorice with a hint of salt in the background.  With the los, however, you can taste the tobacco flavor more clearly than the portion.  It isn't bold or in your face, by any means, but you can taste it mingling with the flavor of the licorice.  That's one thing I like about lossnus - it's as close to the tobacco as you can get.  The snus stays together quite well in the lip, so it's a very approachable snus if you're new to lossnus!  The flavor of this one is quite enjoyable.