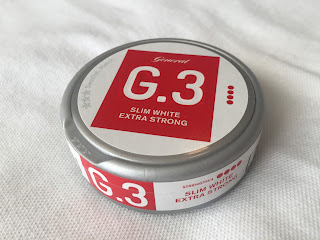 There was originally a review of General G3 Extra Strong Original Portion on this page, but it's since been split into it's own article.  You can access that here.

I've been looking forward to trying this snus for a while for the simple reason that I wanted to compare it to General White Extra Strong Long.  Granted, I don't do many strong portions anymore, I still wanted to try this one out.  Going into this product, there was a lot of build up. I wrote an extensive preview a few weeks back, but to basically summarize what I wrote, General 3 is the next big innovation in General Snus. First came the original General Loose in 1866. Then came the portion snus format in 1977. And now, Generation 3 (G3) by General in 2014. The main focal points was that this was to be a perfect snus - Extra Strong, Slim Fit, Long Lasting, Soft Fit, Minimal Drip. All these were results of a Norwegian focus group that pinpointed what snusers were looking for.  And from those developments came the new Generation 3 (G3) by General Snus. 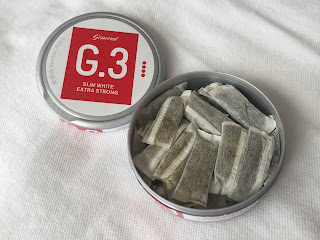 The flavor description of this one says, "Strong and spicy tobacco character with hints of bergamot and green herbs, and slightly tea and hay. A long narrow pouch that is dry on the surface with moist content for low drip and a lasting flavor release."  This snus is a 21.6 gram can with 24 portions, or 0.9 gram portions. The nicotine content is 1.8% or 18mg/g. That breaks down to about 16.2mg/portion of nicotine.

The aroma of this one is a very mellow citrus aroma - not near as bold as in the G3 original portion format. The portions are soft - but not as soft as Tailored portions, which is the first thing I wanted to see when I opened this can. I'm assuming these are not Natufibe portions.  From what I recall, however, these portions are softer than the General White Extra Strong Long.  I remember those being a bit more firm, whereas these are a bit more soft in the lip.  The taste is very close to General White Portion, or General Tailored White Portion. A very small salt presence, minor hints of pepper, and a mellow taste of citrus.  All these flavors blend together really well to deliver the classic General taste.  The flavor of this one isn't as bold as the original portion format of G3, but it still has the classic General taste in a long portion with more nicotine.

If you like strong snus and the General flavor but want a white portion - this is a must try!
Posted by Chad Jones at 1:01 PM