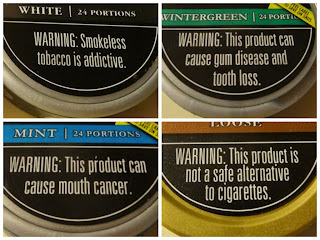 If you have ever bought smokeless tobacco in the United States - you've noticed that it carries one of these 4 warning labels. In 2009, the Tobacco Control Act put all smokeless tobacco into the same category and required these 4 warning labels be placed on cans of smokeless tobacco. This caused a lot of outrage with those of us who were avid Swedish Snus users because we knew that 3 of these warnings were factually inaccurate. I voiced my disagreement in the article "Product Warnings On Snus - A True WTF Moment" and discussed them in this article as well. I went on, recently, to discuss them label by label in this article, as well.

Swedish Match has applied for a Modified Risk label that would make General Snus a Modified Risk Tobacco Product (MRTP).  After submitting mountains of paper to the FDA, the FDA is now accepting public comments for the next 180 days, ending on 23 February 2015.  Before we go into that, let's discuss each warning label and why it is inaccurate, as well as the changes Swedish Match is wanting the FDA to make to each warning label.

"This product can cause gum disease and tooth loss"
First, the myth of gum disease and tooth loss. This one was debunked in a study in the Journal of Clinical Periodontology by Anders Hugoson from Jönköping University and Margot Rolandsson from Karlstad University. This study found "...no significant association between gingivitis, [periodontal pockets] and periodontal disease experience and snus use."  In fact, there is not one piece of evidence that can point to, or proves that, snus causing tooth loss - because it simply isn't true.

"This product can cause mouth cancer"
This one was debunked in a study released in 2003 from Tobacco Control.  That concluded that their "…results do not support any association between use of oral snuff and oral cancer."  This is probably one of the most widely spread myths when it comes to Swedish Snus, however this one couldn't be farther from the truth.

"This product is not a safe alternative to cigarettes"
Numerous studies and reports have pointed to the opposite. In a study in Harm Reduction Journal, Carl Phillips stated, "It has long been known that while no nicotine product is completely harmless, harm reduction products pose only about 1% the risk from smoking and this difference is so great that for the average smoker, using a smokeless product for the rest of his life poses about the same risk as 30 days of continuing to smoke."  Brad Rodu mentioned in an article in Nordic Reach, "...we have a solid scientific foundation to stand on that shows that modern, smokeless products are 98 percent less harmful than cigarettes."

"Smokeless tobacco is addictive"
This is the only warning label that contains truth, as any form of nicotine is addictive.  In a study released in the British Medical Journal, it was said that, “Nicotine is as addictive as "hard" drugs such as heroin.” However, in an article in The Los Angeles Times, Brad Rodu from the University of Alabama suggests, “…nicotine should be treated more like caffeine: as an addictive drug that can be used safely. We would have smokers understand the nicotine addiction can be separated from the smoking.” It is important to separate the dangerous health risks from the addictive ones to be able to approach tobacco harm reduction as a practical aid in smoking cessation. A key principal to recognize is that harm reduction is not harm elimination. In 2010, Dr. Karl Fagerström spoke to this in an interview with 60 Minutes for their televised broadcast of “Going Smokeless” stating, “It’s true. It’s true. And that’s why I say this not to harm elimination. They are still dependent. And addiction is seen as an unnatural state. Thus, addiction is a problem. But this is less of a problem than lung cancer.” While it is recognized that Swedish snus contains nicotine and is addictive, the addiction to nicotine can be handled safely and responsibly and present Swedish snus as an alternative to the smoker who wishes to quit. 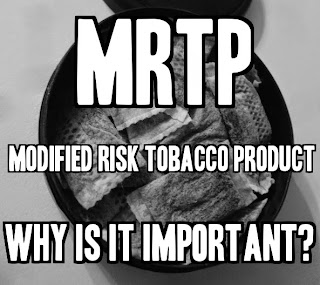 All that being said, why is it so important than Swedish Match be granted these changes to the warning labels on General Snus?  It all comes down to Tobacco Harm Reduction. Last month I wrote an extensive article on harm reduction which I encourage everyone to read if you haven't yet.  It is important that Swedish Match have General Snus labeled as a Modified Risk Tobacco Product to ensure people view it as a proper aid in smoking cessation.

In the United States, there is an alarming number of people addicted to smoking and the results of that addiction are catastrophic. It was said in a 2009 article in HR Focus that an estimated 443,000 people die yearly due to smoking related causes. The New York Times recently published that there are 44 million people addicted to smoking and of those addicted 70% expressed interest in quitting. An article in Drug Topics expressed that only 15% of smokers are actually able to wean themselves off nicotine when attempting to quit. When pharmaceutical aids and professional help are factored in that number can increase to a 44% success rate. In a study published in 2003, it was discovered that 71% of daily smokers with a history of snus use were able to completely quit smoking by switching to snus, whereas 54% of those with no history of using snus were able to quit by switching from cigarettes to Swedish snus.  Swedish Snus DOES help people quit smoking, and studies have shown it to be much better at it than pharmaceutical aids.  And it's important people know that Swedish Snus is a much safer alternative than smoking when considering their method of quitting smoking.  It is important that the warning labels that are forced onto Swedish Snus be removed if they do not present the truth about the product itself.

What you can do to help:
It is up to us to let the FDA know our opinion!  They are asking for public comments for the next 180 days, and you can go to this page at FederalRegister.gov , click "Comment Now" and provide your feedback. In the event that link doesn't work for you, comments may also be submitted here, at Regulations.gov. If you're a snus user - tell your story! Tell them how snus helped you quit smoking, let them know that it is a practical aid in smoking cessation. If you're a non snus user who has lost a loved one due to smoking related illness, disease or cancer - tell them that you wish more products were presented to the smoker that would help them quit smoking.  We want the FDA to know the stories of everyone snus has helped quit smoking so that they can see our side of the story as well.  I submitted my story today, and I encourage everyone to do the same.  Submit your story and share this link with everyone.  Our goal is 100,000 submissions - which I know we can do if we get the word out about this.  I encourage and challenge every single one of you to do your part to make sure that General Snus is branded a Modified Risk Tobacco Product so more people who are hopelessly addicted to nicotine can find a way to put down the cigarettes and move forward with their lives.

Keep in mind, they note - "Submit either electronic or written comments on the applications by February 23, 2015. Please note, however, that it will be more likely that the Agency is able to consider your comments before referring the applications to the Tobacco Products Scientific Advisory Committee if you submit your comments by November 25, 2014."