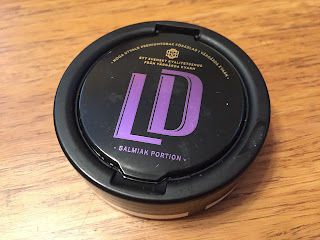 I've always been of a fan of LD Salmiak and considered it one of the top 5 licorice snuses on the market.  When JTI became Nordic Snus AB and redesigned the LD line, I was rather excited to revisit and re-review the lineup! In my early days, I was a big fan of LD Black, which was eventually discontinued when the original portion LD Salmiak was launched.  When it comes to this product, the flavor description says, "LD Salmiak Portion is a snuff with a taste of salmiak. The taste is relatively mild, and is mostly aimed at the snus, who prefer a taste of salt liquorice." This product comes in an 18 gram can with 20 portions for 0.9 gram portions. The nicotine content is 8mg/g (0.8%), which breaks down to 7.20mg/portion. 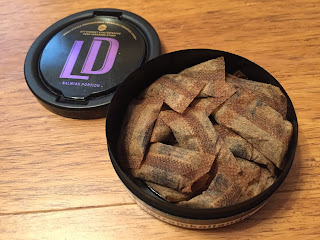 When you open the can, a very present black licorice smell greets you. The portions are quite moist, soft to the touch, and feel great in the lip! The flavor profile of this one is absolutely delicious; if you like salty black licorice, you'll love this snus. The flavor of black licorice is very present, and is accompanied by a nice salty taste. There's also a light taste of pepper in the background and a mild tobacco flavor.  The flavor of this one lasts about 45 minutes on average, which is usually how much life I get out of an original portion.  The nicotine content also feels to be about regular strength.  As far as licorice snuses go, I've always been a fan of this one and rank it easily in the top 5 licorice products on the market today.  If you like licorice, this is a must try!
Posted by Chad Jones at 8:44 AM