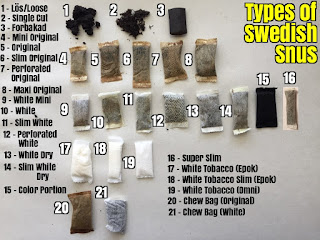 I've been spending some time on the Snus Reddit lately helping answer questions from people who are new to snus, and a lot of these questions have been reminding me of things that I could write about here at Snubie.com to help people who are new to snus. One of the more popular questions is regarding the difference between original portions and white portions. If you click the image to the left, you can make it larger and view a side by side comparison of the various types of snus. Below, we'll get more into detail with the different types. From the 19th century until the 1970's, snus war primarily consumed in the loose format. In the past 5 years, the types of snus has grown drastically, a key factor has been the introduction of the "long" portion.

Before we dive into the different types of portion, one common question I see is "Why does snus go in the upper lip?"  The reason behind this is what makes snus discrete and spit-free.  The salivary glands in the lower mouth cause the tobacco to come into contact with your saliva, which makes you spit.  Putting snus in the upper lip causes it to be spit free, and allows for a higher level of discretion. 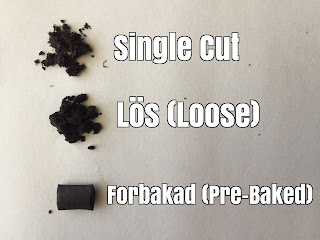 Los is the traditional way to enjoy snus.  There are a few types available.  Regular lös snus is ground, however you can also get lös in single cut, which is when the tobacco is cut and not ground.  There is also a type of lös called forbakad, or pre-baked, which is los that you can easily pop into your lip. 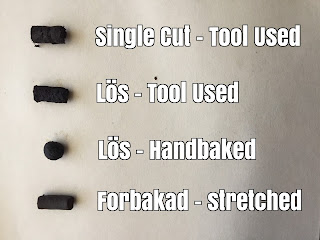 There are several ways you can get lös into your lip.  You can use a tool, such as the Icetool or the Mortar, or you can handbake it.  How you get it into your lip depends on what works best for you! 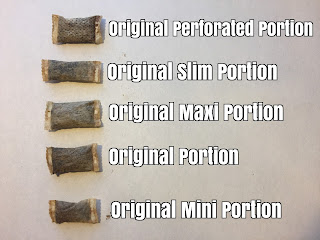 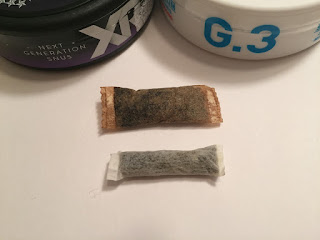 Another new type of snus that has been recently released is the "super slim" portion.  A super slim is a slim portion, but much thinner than a regular sized slim portion.  Though it is the same length, it contains less tobacco and manufacturers can fit more of these into one can. 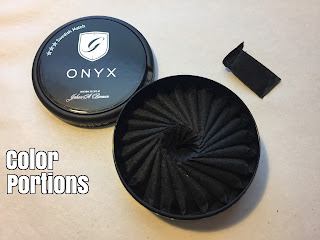 Currently, the only one of these produced is General Onyx.  It's a black portion, however, a black portion is basically a white portion in a different colored portion material. 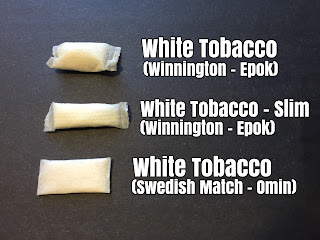 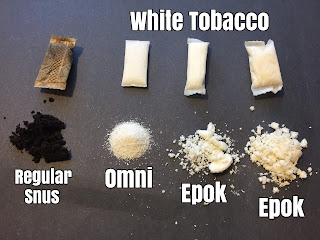 Both companies describe their white products a little differently.  You can see in this photo what's inside the pouch, and compare it to a regular snus product.

This is how Swedish Match describes their white tobacco product, Omni:  "Our new brand Omni doesn’t compare to any of Swedish Match’s regular snus products. Omni is all white pouches, with dry contents which give a quick and efficient delivery of flavour and nicotine. Much thanks to its size, colour and dryness, Omni is perceived as more discreet than regular snus. Omni is used the same way as traditional snus, and it provides the same nicotine experience. It is manufactured with a patented production technology, and the contents are made up of a mix of cellulose fibre, a smaller share of tobacco and food grade approved additives which are packed in all white pouches." 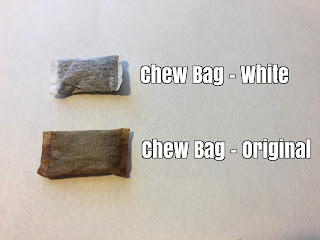 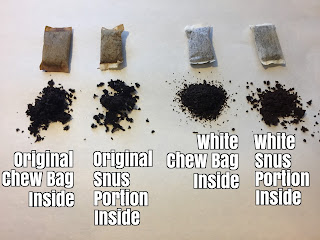 The main difference is that the Nordic Chew appears to be cut instead of ground like Swedish Snus.  But that's really the only difference other than the name.

This is how Northerner describes Nordic Chew: "Nordic chew is a modern chewing tobacco packed in pouches so you easily can place it under the lip like regular snus. Rather than undergo a process like traditional chewing tobacco, Nordic Chew is pasteurized and packed in pouches to eliminating the need for spitting and ships in portions similar to snus. Try our Nordic chew brands Cruiser chew and Thunder."

Video on the different types of snus: