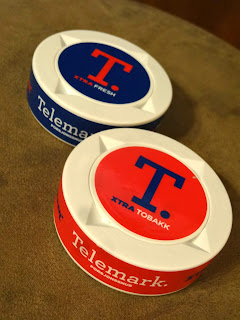 If you recall, last year I reviewed two new products - Lapland and Telemark. At the time, these new products came in bags, and I was not impressed with the snus. However, now, a change has been made and it's a big one. These new products come in the Jakobsson's cans (not sure why, as this snus is listed as being made by "Telemark & Lapland Independent Co", but perhaps they outsourced the cans like V2 does by letting other companies use their cans). They even have the same compass under the catch lid. There are two new products, XTra Fresh, described as " A fresh taste of mint. 20 portions / 1g per portion" and XTra Tobak, described as "Has a pure tobacco taste. 20 portions / 1g per portion"  These are also both listed as Strong Portions.  I recently picked up a can of each from Northerner.com to try out. 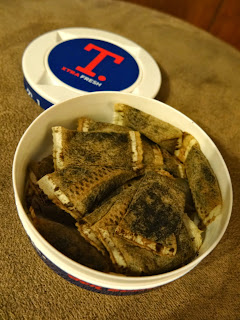 Remember I mentioned above that they're using the Jakobsson's cans? This snus also appears to be using the Jakobsson's recipe, because it's a dead ringer for Jakobsson's Mint Strong. The smell, the taste, everything. It's spot on. Which leads me to wonder if Gotlandssnus is making this snus for Telemark and they rebrand it. I'll quote my review from Jakobsson's Mint, because this snus appears to be the exact same product. "The portions are very moist, comfortable, and soft. The taste comes on quickly as soon as you put the snus into your mouth. The taste is a slightly sweet but herbal flavor paired gently with mint and rounded out with a nice salt balance to it. The flavor lasts quite a while, and while it is sweet it's not too sweet, which seems to be a problem whenever mint is brought into the equation. I definitely dig whatever herbal flavors they added to the recipe because it's what makes this snus truly stand apart from other mint snuses on the market today."  If you're a fan of Jakobsson's Mint, this snus is a few cents cheaper. 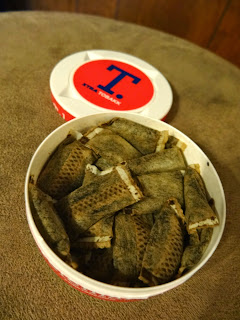 When you open a can of XTra Tobak, the aroma that comes through is a sweet citrus smell. The flavor is a traditional Swedish Snus flavor, a mellow base tobacco with a sweet-ish citrus flavor on top, a mild salt balance and a little pepper in the back.  This one isn't too bad.  I thought the taste would be close to Jakobsson's Classic Strong, since the other one was virtually the same as Jakobsson's Mint, but this one seems to be lacking the herbal hints that I detected in Jakobsson's Classic Strong.  Other than that, the taste is pretty close!

These two are a MAJOR step up from the last batch of Telemark Snus I tried.  I'm not sure who's making it, but if Gotlandssnus/Jakobsson's has a hand in it, maybe that's why the quality has increased so much, as they make a fine product.
Posted by Chad Jones at 6:35 AM