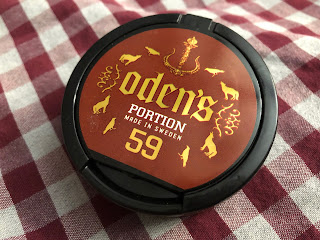 It's been quite a few years since I've reviewed this one.  Due to a new law in Sweden, they're mandating snus have at least 20 portions per can.  Most Odens products have traditionally had less than that, so with the new upgrade in portion count, I figured it was time for a new review!  SnusMe.com carries most of the Odens products and ships to the US, so I grabbed a ton of them on a recent order so I could do new reviews of them. Today, we're talking about an Oden's product with a cinnamon flavor - Oden's 59 (Original Portion), a regular strength Oden's product! Yes, they do make those.  The flavor description for this one says, "A normal strength portion with a taste of cinnamon".  Each can weighs 20g and now contains 20 portions, for 1g portions.  The nicotine content is 9mg/g (0.9%), or 9mg/portion. 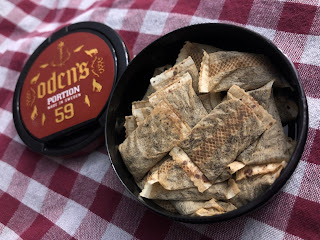 When you open the can, a gentle, natural aroma of cinnamon greets you with a mild tobacco character. The portions are pretty moist, and have a quick release of flavor!  I love the plump, one gram portions.  The taste is quite good. The cinnamon isn't super sweet, and it's not in your face. It's balanced out pretty well with a natural, earthy base tobacco character. The nicotine strength feels to be about the regular strength level, and the flavor lasts about 45 minutes on average! If you're looking for something different, Odens 59 is a pretty interesting snus. It's not super sweet, and it has a pretty nice flavor. I also like that this one is regular strength!
Posted by Chad Jones at 8:58 AM