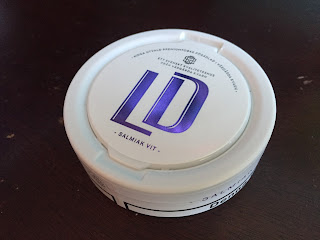 As many of you know, earlier this year JTI became Nordic Snus AB. When that happened, they also redesigned the entire LD product line. I've always been a big fan of LD snus, so I figured I would go back and revisit the LD line. I've been a fan of LD for years, both their original flavor and their licorice flavor. I've long considered LD Salmiak to be one of the best licorice products on the market. The flavor description of LD Salmiak Vit says, "LD Salmiak White Portion is a snus with a mild tobacco flavor. This snus has also been seasoned with salmiak and appeals to those who like salty licorice." This product comes in a 16 gram can with 20 portions, for 0.8 gram portions. The nicotine content is 8mg/g (0.8%), which breaks down to 6.40mg/portion. 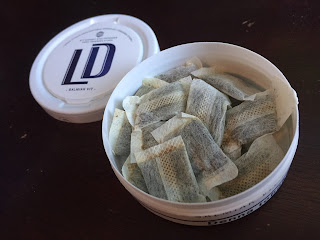 When you open the can, the aroma that you’ll encounter is a mellow, black licorice smell with a light touch of sweetness. The portions are soft to the touch and feel very comfortable in the lip. When it comes to the taste, this is a licorice lovers snus! The taste is a straightforward black licorice taste with a light touch of sweetness. In the background there’s a mild tobacco character and a little spice character. Being a salmiak snus, this snus is a little salter than your average snus. But that’s a great thing if you like salty black licorice! The flavor lasts on average about an hour. The nicotine content feels to be about the regular strength.  If you're a licorice fan, this is a must try!  As I've long said, I consider LD Salmiak to be in the top 5 licorice products currently on the market.
Posted by Chad Jones at 9:08 AM