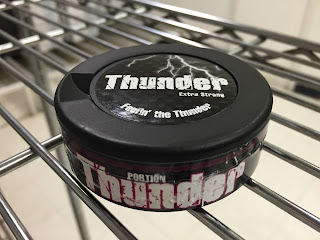 There haven't been many raspberry flavored snuses. In 2011, Swedish Match released Catch Collection Thrill (Raspberry Pepper) and last year V2 released Thunder Ultra: Raspberry. I guess it performed so well that they not only released this version, but they also discontinued Thunder Berry Blend, which I reviewed way back in 2009. It stuck around quite a while, but in the end, it seems people really dig the raspberry flavor, so Thunder now has Raspberry under it's product line. If you remember, in May, 2013, V2 issued another statement on their Facebook Page, saying "Let the voting begin for the next Thunder Ultra portion taste, one vote per person. Since we have to many options, you need to type it in as comment :-)". The flavor options were Raspberry, Licorice, Vanilla, Brandy Alexander, Wintergreen, Chocmint, Raisin, Coffee, Green Tea, Strawberry, Whiskey, Bacon, Apple, Blueberry, Cinnamon, Eldeberry, Rum, Root Beer, Blackberry, Strawberry-Banana Mint, Peach, Licorice Peach." Some weird, some traditional - but in the end it came pretty close with Raspberry besting Brandy Alexander, which bummed me out. But, the surprise came when V2 said they were going to release BOTH of the top 2 snuses in a limited edition release. 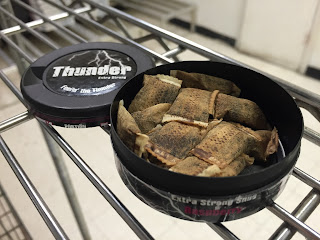 So how does this snus compare to the Thunder Ultra version? Well, for one it's not as strong. The portions are quite moist, but not as moist as the Ultra version. The aroma is a pure and bold raspberry smell, much like a raspberry jam or preserves. The tobacco flavor in this one is more prevalent, as is a taste of pepper. But it mixes very well with the natural raspberry flavor, which thankfully isn't too sweet, and more natural tasting, like the Ultra version. All in all, it's a very tasty snus. If you liked Thunder Berry, or fruity flavored snuses, this is definitely one to check out, it's very tasty.
Posted by Chad Jones at 3:51 PM