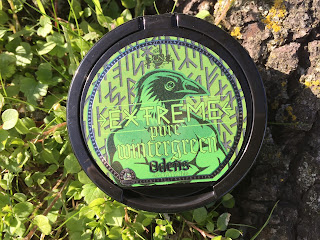 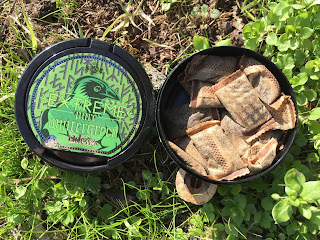 When you open a can, the aroma of wintergreen smacks you in the face in a way that I've only ever seen in American Dip. No hints of anything, no tobacco, just straight up wintergreen. The portions are very moist, and the flavor comes on virtually immediately upon inserting this snus into the lip. There isn't much to say about this one other than it is, in all senses of the word, Wintergreen. If I had to compare it to anything I've had in the past, it reminds me a lot of Copenhagen Wintergreen, a dip that I did a video review of a while back. It's got a nice little burn, and a hella strong nicotine kick. This snus is definitely one I would say is good for those who like dip, or are looking to quit dip and switch over to snus. It is probably the closest snus to American wintergreen that I've ever had.  As far as for me, I like snus, so this isn't a snus that I'm going to revisit.  I'm not a fan of Wintergreen unless it's mixed in with something else, like Oden's Creamy Wintergreen I referenced above, or added in as a hint in Captain Yankee. But if you're a dipper, or a snuser who likes dip, or a wintergreen lover, this is definitely a snus for you.
Posted by Chad Jones at 5:49 PM