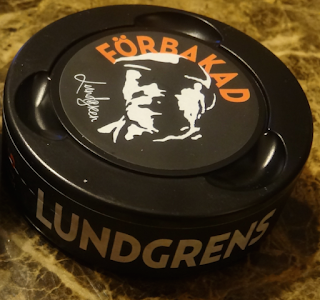 I've been very excited to review this new product from F and L ever since I first heard about it. Or rather, saw it on Instagram. It's crazy how social networking has become a new platform to discover new snuses that I had no idea existed. This was released as a limited edition (the pre-baked version "forbakad") before being released in wide range distribution. I picked up a can of each from Northerner.com to see just what the hoopla was all about. When the limited edition came out, F and L said, "When we launch Lundgren we do so with a new snus in a special box in a numbered edition of 15 000 packs. Lundgren is the first prebaked snuff that combine the best of both worlds, the taste experience of loose snus with aliquot convenience. With Lundgren Prebaked you can form one or more pouches exactly as you want without the mess. Prebaked 2014 you can buy Pressbyrån and 7-Eleven, while stocks last." 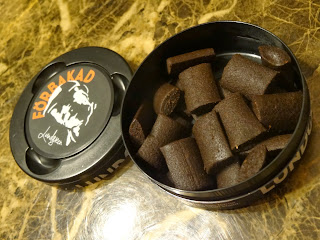 Lundgren's Forbakad (Pre-Baked) is one I've been really looking forward to trying out. I can't say for sure, but this really seems to be something for the non-traditional snuser. The user who wants to try los, but doesn't want to mess with using a tool, handbaking, or grabbing a pinch. F and L tells us, "Prebaked portion snus without a pouch, it combines the feel of loose snus and the the easiness of portionsnus. Rich tobacco taste where you find dark notes and sweetness, with hints of meadow flower and herbs." 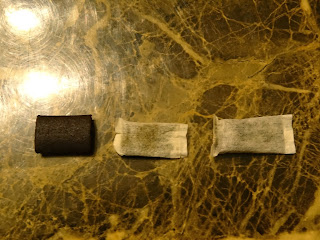 Comparing the size, Forbakad is on the left, a Swedish Match mini is in the middle, and a Swedish Match White Portion is on the far right. The pre-baked portions are about the size of a mini portion, so those of you who like large prillas of lossnus will be a little let down on this one. I think this is a great product for those who want to try los, but without the mess. Great entry level, or "los training wheels".  When you open the can, the aroma that comes through is a rich tobacco smell, no citrus or herbs or floral notes, just a tobacco aroma.  The pre-baked portions are packed very tight, they don't break apart easily when pushed on.  As with lossnus, the flavor is pretty immediate.  Whereas this one has the same taste description as the white portion, the taste is actually quite different.  The rich tobacco flavor is very present, and there's a nice amount of salt present, which I really dig.  The herbal hints come out later on in the snus, the longer you have it in, though I didn't detect any of the floral attributes this time around.  The flavor is very good, and it lasts quite a while.  I was able to keep a pre-baked portion in for 30-45 minutes without it breaking up or causing a "mudslide" as happens with some lossnus.
Posted by Chad Jones at 6:45 PM